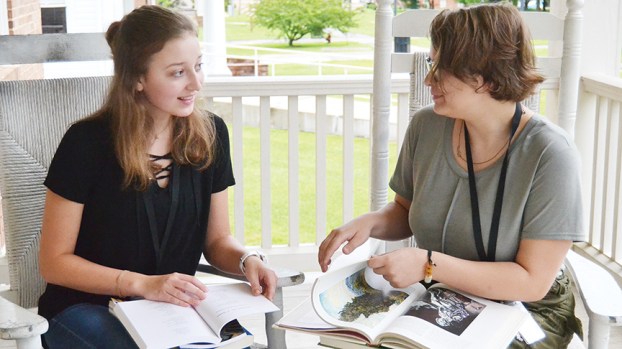 Photo by Donna Campbell/At least a 10th of the student population at Mississippi School of Arts is from Lincoln County and surrounding areas. The statewide residential school is located on the historic Whitworth College Campus in Brookhaven. Pictured are, from left, juniors Charlotte Drane of Wesson and Hannah Arnold of Brookhaven.

MSA student: ‘We all have a passion for art’

Through her early teenage years, Hannah Arnold could see Mississippi School of the Arts nearby and wondered what it would be like to go to school there.

“I’ve always been drawing since I was little, like all the time,” she said.

She auditioned her sophomore year at Brookhaven High School and was chosen to attend.

“It’s all about art. I’m really lucky to live right next door,” she said.

The school was created during the 1999 regular Legislative session. Located on the historic Whitworth College Campus in Brookhaven, it is designated as a state landmark. The campus is also on the National Register of Historic Places.

Arnold, a 16-year-old junior, is a commuter now, but will probably stay on campus her senior year.

She took part in MSA’s weeklong summer camp and knew for sure she wanted to enroll.

“It was very fun,” she said. “I met a lot of people that I’m still talking to today that made it in with me. It was nice to make friends at summer camp and to have them come back (as students),” she said.

She still sees her friends at Ole Brook when she goes to BHS for her Spanish II class.

Arnold, who is in the visual arts program at MSA, has never taken art in a formal setting.

“Being able to be taught proper art techniques and stuff that is actually going to benefit and improve my art is pretty nice. I’m enjoying it so much,” she said.

She is thrilled at the opportunities she’ll have as an art student like talking to college students who visit MSA for art shows.

Sixteen-year-old Charlotte Drane was a Wesson High School sophomore when she decided to audition for a spot at MSA in the literary arts program.

Her cousin attended the arts school and thought she’d like it, too, since she enjoyed writing so much.

Both believe listing MSA on their college applications will be a huge plus.

It’s an adjustment, Drane said, because she’s not surrounded in the hallways by people she’s known for years.

“Some days, it’s hard not to be able to turn and tell your friend something, but you make new friends here,” Drane said.

“And with social media, you can still keep up with your friends,” Arnold said. “The people who are here, we all have similar interests. We all have a passion for art. It’s really easy to make friends.”

Enrollment is up this year, said Executive Director Suzanne Hirsch.

Other students come from nearby counties.

“A lot more did apply but not everybody made it,” said Jennifer Jackson, coordinator of school advancement. “It gets more competitive every year.”

Application includes an audition and an interview. Only about 38 percent of the students who apply make it, Hirsch said.

Fifty-five students graduated in May with a total of $10.2 million in scholarship offers, Jackson said. The school can also boast a 97 percent college attendance rate.

Besides a rigorous arts regime, students enrolled at MSA also take the bulk of their academic classes on campus. General, accelerated and advance placement classes are available at MSA and students can also take dual-credit courses through Copiah-Lincoln Community College.

MSA has partnered with Brookhaven High School since the opening of the arts school to provide additional academic courses to the students. Courses can include foreign language, math, science and additional courses needed.

BHS also serves as the special education liaison for MSA for any students with special needs.

High school band and athletic experiences are offered to MSA students that also attend BHS as the student’s schedule allows.

On their first day of school earlier this month, students participated in the annual candlelight dinner. Seniors entering the school year with the highest GPA in each discipline were recognized: Brittany Castilaw in literary arts, Alison Brown in media arts, Demi Doty in vocal music, Emma Siler in theatre, Junyla Silmon in dance and Abigail Jordon in visual arts.

The seniors each lit a candle and passed on the light to students in the audience. After recognition, students walked to the campus bell tower where they sang the school’s alma mater.“The bell, which dates back to the early 1920s, was used to signify the end of the school day and return to the dorm at Whitworth College,” Hirsch said.

Currently, the fall visual art exhibit is open at Enochs Hall Art Gallery through Nov. 10. Students will perform in their first dramatic show of the year, “Laundry and Bourbon” by James McClure Sept. 9-10.

Property owners could lose their land if taxes are not paid

Property owners behind on 2014 taxes could risk losing their land if they’re not square with the county before Aug.... read more