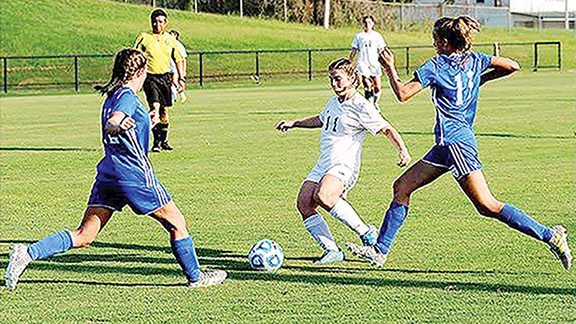 The Brookhaven Academy Lady Cougars soccer team lost a tough district game to Natchez Cathedral earlier this week by a score of 2-0.

The game was a defensive battle until the 37th minute of the first half when Olivia Moore of Cathedral fired a 40-foot strike into the right corner of the net and gave the Green Wave a 1-0 lead heading into halftime.

In the second half of the contest, Moore added on to her impressive day with another goal to secure the 2-0 win over Brookhaven Academy.

“Our girls played hard today and the intensity was there,” Brookhaven Academy head coach Mark LeBlanc said. “Before the game, we discussed stopping Moore. We did a good job most of the game defending her, but we let her have too much space outside the box and she was able to bury a couple of long range shots.”

The Lady Cougars had several chances at scoring goals, but missed some close range shots throughout the game.

“We have to convert our opportunities on offense against a team like Natchez Cathedral. You don’t get chances,” LeBlanc said. “Our passing is improved, but we just have to finish. We have not been able to get over the hump against Cathedral, but we are closing the gap.”

In a rain-shortened junior varsity game, the Lady Cougars and Green Wave played to a 0-0 draw.

The Lady Cougars defeated the Lady Rebels of Adams County Christian by a score of 2-0 in a key district matchup Wednesday afternoon at Brookhaven Academy.

Brookhaven Academy started the scoring in the first half when Lucie LeBlanc dropped a perfect pass to Summer Hill and Hill booted a left-footed shot into the back of the net. The goal was the first of the season for Hill, a senior and first-year player at Brookhaven Academy.

In the second half, eighth-grader Anna Caroline Adams scored her fourth goal of the season on a perfect cross from junior Ainsley Allen to secure the 2-0 victory.

“I am pleased that we have many different girls scoring this year with two of our new players providing the scoring today and that is encouraging,” LeBlanc said. “I felt like we dominated the game at times. Our backline defenders and midfielders kept the ball pressure on the other side of the field most of the game.”

The victory over ACCS was the first district win of the season for the Lady Cougars and the win gives the team a chance to make a playoff run.

“We have to stay focused every game, support each other and maintain our spacing the entire game,” LeBlanc said. “If we do not lose our concentration, we are a tough team to play because of our athletic defensive middle. Olivia Lewis continues to improve at goalie and picked up her sixth shutout of the season.”

The win moves Brookhaven Academy to 6-4-1 on the season.

After all eight local schools started their 2017 season at home last week, five of the schools play games on... read more