A Monticello man who fled Lawrence County deputies after a wreck Monday morning crashed his car into a historic church in the Silver Creek community before escaping on foot into a graveyard, authorities said.

Charges for Williams, who was on parole with the Mississippi Department of Corrections, are pending, he said.

Butler said deputies on patrol discovered a vehicle that had been hit and while they were getting information about the abandoned vehicle, they saw a car driving up with a missing headlight that turned around and headed away at a high rate of speed. He said deputies followed the vehicle, which was driving at excessive speeds on Hwy. 43, and saw it turn toward Old Silver Creek Baptist Church on Hwy. 84.

By the time deputies got to the vacant car, it was sitting in a gaping hole it had punched into the wall of the sanctuary.

“He’d done run it into the church,” Butler said. “He had to be running a pretty good speed to do the damage it did.”

By then, Butler had arrived.

“We tracked the blood trail where it looked like he went down in the graveyard and went to the back of the church,” he said. “He’d torn up the gate.”

Butler said they were canvassing the area looking for the injured suspect, when a homeowner told them he’d seen a man walking along the highway. They kept searching for fear the man had been hurt badly in the crash.

“One of my deputies saw someone laying in a citizen’s yard,” Butler said.

He was conscious, but incoherent, Butler said. He was taken by ambulance to Lawrence County Hospital for a head wound and other injuries from the airbag that deployed when his car hit the building.

A sample of Williams’ blood was sent to the state crime lab for testing for alcohol and drugs, he said.

Williams was taken into custody after he was released from the hospital.

“They said he was OK, other than he was banged up,” Butler said.

Pastor Micah Rutland said the congregation at Old Silver Creek was established in 1814. This is the second building for the church.

“It’s a shame to see such a beautiful, historic building damaged in this way, but we know that people are more important than buildings and damage such as this can be repaired,” he said. “This is a great community with all of its people showing up to make sure that its ministry continues no matter what happens to the corner of a building”

Melanie Barnett was saddened Monday to hear about the damage. She’d just visited the beautiful church last month for the first time with her father Ausbin Barnett and her sister Sharyn Stalans because they were invited to the church’s fifth Sunday sing.

“I have traveled that road thousands of times and always thought how absolutely beautiful that little country church was and would love to see the inside but had never had the opportunity present itself to me until this came up,” she said. “When you walked in it was picture perfect. It looked as though it should be sitting in the mountains somewhere. The stained glass windows are gorgeous and the wood on the inside just sets everything off with that down home country feel.”

She said white pews stood out against the natural wood look on the walls and ceiling.

“A beautiful place and this story broke my heart,” she said. “But God is in control and it will be used for his glory.” 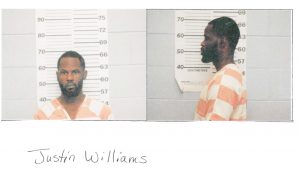 Rain, flood waters in the forecast for Lincoln County