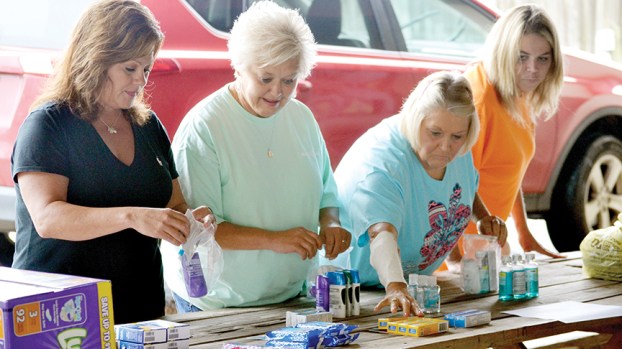 Photo by Donna Campbell/Members of the Brookhaven Moose Lodge will be gathering supplies for Texas residents through Sunday. Pictured are, from left: Andrea Waldrop, Stephanie Allen, Judy Dykes and Lacey Pepper.

At least two organizations in Lincoln County are collecting supplies for those in Houston and surrounding areas in Texas.

The Loyal Order of Moose and the Women of the Moose for Lodge 1968 will be accepting donations at their family center at 1229 Calcote Loop, behind R.B. Wall, through Sunday.

Shawn Nations and her organization Nose to the Ground planned to collect items at the Wal-Mart parking lot on Brookway Boulevard Thursday starting at 10:30 a.m., but cancelled due to the weather threat. She plans to reschedule soon. For information, call Nations at 601-669-4101.

Both groups are accepting the basic necessities, and ask that no clothes be donated.

Stephanie Allen with the Moose Lodge said cash donations are accepted as well. Checks should be payable to Brookhaven Moose Lodge and marked for “Hurricane Relief.”

Donations are also accepted through paypal to fundraiser1968632@gmail.com.

Allen said members will be in the back behind the family center most of the days and evenings collecting items, but if they’re not, donations can be left at the pavilion behind the building.

“We’re hoping to get enough to fill an 18-wheeler,” Allen said.

They don’t have a destination in mind yet, but plan to take it where the needs are in the Houston area.

“A lot of our husbands are boilermakers and worked in refineries there. A lot of us have spent time there,” she said. “They’re like family.”

Nations and about 20 members of her group, which is a volunteer organization of trackers who search for wounded deer for hunters, will be loading a truck Thursday. She hopes to send the truck off Friday afternoon with a team of drivers.

“They are going to go as far as they can get into Houston,” she said. “They’re going to try their best to get where the eyewall came through, around Corpus Christi and Rockport.”

Nations, a nurse, lived in South Mississippi when Hurricane Katrina hit 12 years ago this week. Her parents’ home in Gautier flooded.

“We’ve all been in that situation, that gut-wrenching feeling of not knowing and not having anything,” she said. “It’s really personal for me.”

Nations’ group will start collecting at 10:30 a.m. and stay until donations stop.

“We’ll be there until there’s nothing else we can get,” she said.

On Sept. 5, Lt. Gov. Tate Reeves’ grandmother will become a centenarian. But if all goes as planned, Ruth Daniel... read more