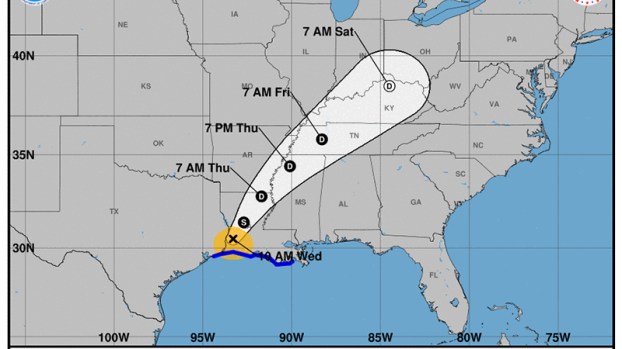 A tornado watch is in effect until 6 p.m. for 46 counties in central and southeastern Mississippi including Lincoln, Copiah, Lawrence and Pike counties, according to the National Weather Service in Jackson. A flash flood watch is also in effect until Thursday evening.

There is a slight threat of severe thunderstorms through early evening.

Isolated severe thunderstorms will be possible, mainly from early afternoon through the early evening hours. Damaging wind gusts and brief tornadoes will be the main concerns.

Localized flash flooding will become likely by this afternoon through tonight as locally heavy rain bands associated with Harvey move over the area. A few areas may pick up several inches of rainfall in a short amount of time, increasing the flood threat.

East to southeast winds will increase through the day and from early afternoon through tonight sustained speeds up to 20 mph are expected with wind gusts up to 30 mph possible.

The National Weather Service in Jackson has expanded the flash flood watch.

Locally heavy bands of rainfall attributed to Harvey will move into the the area from the south today with potential for heavy rainfall not ending until Thursday. Total rainfall amounts should generally range from 1 to 3 inches with locally heavier amounts possible. In some spots much of the rain could come in a short amount of time, increasing the flash flood threat.

The flooding of roads, low lying areas, and areas with poor drainage will be possible. If encountering flooded roadways, remember to turn around, don`t drown.

Monitor forecasts and be prepared to take action should flash flood warnings be issued.

Harvey’s rain is heaviest in history