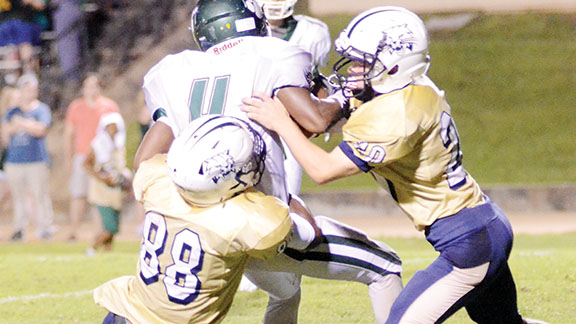 Warrick Cook (88) and Reid Smith (20) of Bogue Chitto make a gang tackle in a game played earlier this season. (Photo by Dylan Rubino)

The Bogue Chitto Bobcats traveled to Covington County on Friday night and brought back home a 10-8 victory over the Mount Olive Pirates.

All the scoring for both teams took place in the second quarter. Sophomore wideout Zach Upkins put Bogue Chitto (2-1) on the board with six minutes remaining in the second quarter when he hauled in a 13-yard touchdown pass from quarterback Trey Nettles. Nettles would convert the PAT kick and give his team a 7-0 lead.

Mount Olive (1-3) responded less than four minutes later with a touchdown run and 2-point conversion that put them ahead 8-7.

It would be Nettles who would fittingly score the game winner, a 21-yard field goal that came with one second remaining in the first half and gave BC the 10-8 lead that they would never relinquish.

The Bobcat defense carried their team in the second half and stopped multiple drives deep in their own territory.

“We kept hurting ourselves with penalties on offense,” said BC head coach Gareth Sartin. “We had a scoring play called back on a flag and another big play called back and that’s something we’ve got to clean up going forward,” said Sartin.

The Bobcats return home next week to host the Salem Wildcats for a 7 p.m. kickoff at Bogue Chitto.

Enterprise blown out by Clarkdale 40-12 at home