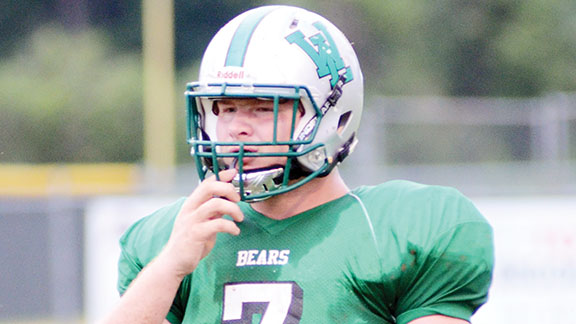 Chase Owen of West Lincoln fixes his mouthpiece before a play during a game earlier this season. (Photo by Dylan Rubino)

West Lincoln head Coach BJ Smithhart knew his players were going up against a tough team Friday night but they went in as prepared as they could be.

Pelahatchie led the first quarter 16-8. The Chiefs scored twice more in the second quarter, but the Bears added three touchdowns of their own to enter halftime 30-26.

“We really played a good first half,” Smithhart said. But the second half didn’t go the same way.

Pelahatchie’s speed and stamina took them to another three touchdowns in the third quarter and one additional one in the fourth, all unanswered by the Bears.

“We played with great effort,” Smithhart said, adding that he was proud of the showing his boys made. “You know, speed really wound up getting to us as the game went on.”

The coach insisted he was proud of the way everyone played.

“I really wish we could have kept the score closer,” he said, “because it does not reflect how well these boys played. But we’ll put it behind us and move on to the next game.”

The Bogue Chitto Bobcats traveled to Covington County on Friday night and brought back home a 10-8 victory over the... read more