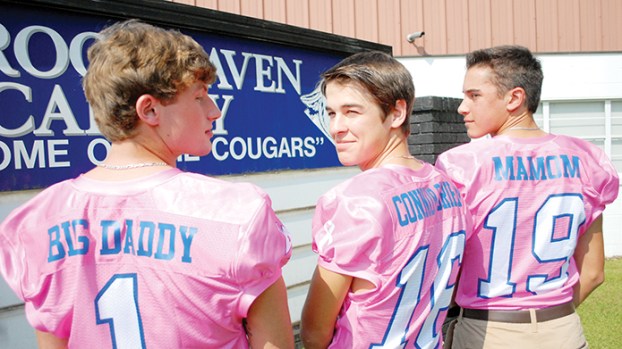 Photo by Matt Rushing/The Brookhaven Academy Cougars will honor those who have or had cancer by wearing pink jerseys in tonight’s game. Pictured are, from left: Logan Murray, Cole Griffin and Cade Brown.

It’s going to be an emotional night at Brookhaven Academy as the football team prepares to honor those affected by cancer.
BA will hold its first-ever pink game tonight, playing against Ben’s Ford Christian School at Red Stuard Field.
Former Cougar Connor Griffin and 8-year-old Magnolia Jones are among the cancer survivors to be honored with their names on the backs of player jerseys.
Head coach Ron Rushing started this tradition as coach for the Cathedral Greenwave in 2011. This will be his first time doing this at BA.
“This is my favorite game of the year,” Rushing said. “Being able to bring this tradition to BA is special. I’ve seen how much it’s grown with my years at Cathedral, it’s a real emotional night.”
The Cougars will wear pink jerseys with names of those who have or have had cancer on the back of them.
Cole Griffin, a junior wide receiver for the Cougars, will be honoring his older brother Connor Griffin, who had cancer as a child.
“He means a lot to me. He’s my brother and I’m glad we got a chance to play together last year,” Griffin said.
Connor, who had a tumor on his back when he was 6, wasn’t supposed to walk again. His perseverance paid off. He beat cancer and made his way back onto the football field as a leader for the Cougars in his senior season last year.
“I think it shows you what kind of man he is,” said Griffin. “I knew my brother always had my back on the field and I still feel his presence out there.”
Senior cheerleader Madalyn Oglesby will be cheering for Jones, who was 4 years old when she was diagnosed with acute lymphoblastic leukemia in 2013.
“She earned the nickname ‘Warrior Princess’ because she fought cancer like a true warrior,” Oglesby said. “I can’t imagine honoring anyone else during this game. Magnolia is only 7 years old, but she has shown me what it truly means to fight like a girl and beat cancer.”
Jones took her last chemo treatment Oct. 7 and has since been diagnosed cancer free.
Football players Cade Brown and Logan Murray are honoring their grandparents.
“I’m looking forward to representing my great-grandma,” Brown said. “She died of breast cancer several years ago. I take a lot of pride in wearing her nickname ‘MaMom’ on the back of my jersey.”
Murray chose to represent his granddad, nicknamed “Big Daddy”, who he said was a father figure to him.
“He died after four years of battling lung cancer,” said Murray. “I always looked up to him and I strive everyday to be more like him. This game is not just about family members, this is a game representing everyone who has struggled or died from cancer. It’s a big deal.”
Rushing previously coached baseball at BA from 1999 to 2003. His assistant coach at the time, Daniel Burns, has since died of colon cancer.
“He was a good friend of mine. Three of my grandparents passed away from cancer. This is a disease that affects everyone regardless of race, gender, etc.” said Rushing. “This gives our players a chance to honor people they know that have had cancer by wearing their name on the back their jersey.”
Pre-game ceremonies start at 6:35 p.m. Senior football players will line up with the individuals they are honoring.
As honorary captains, Griffin and Jones will represent the Cougars at mid-field for the coin toss.
“This game is for everyone in town. If you know someone that’s been affected by cancer, it doesn’t matter what school you represent, we’d love to have you come out, watch the game and see the ceremony,” Rushing said.

The founder of a mentoring program for youth in the area has ideas for improving the city. Falana McDaniel, who... read more