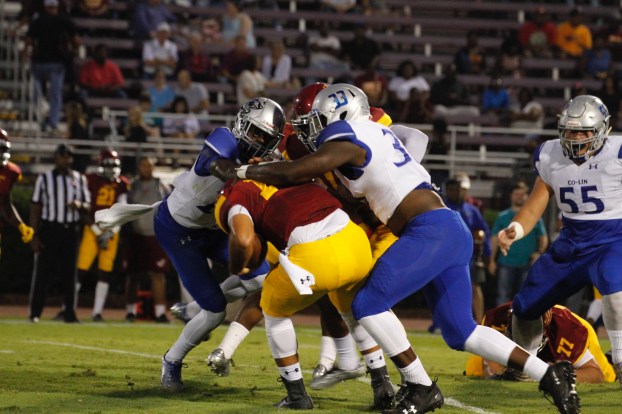 Sophomore Damien Dickens wraps up a JCJC rusher in the backfield. Dickens led the Wolves with 12 tackles and a forced fumble. (Photo by Natalie Davis)

ELLISVILLE – The No. 20 Copiah-Lincoln Community College Wolves (2-2) were haunted by turnovers and struggled finding an answer to the Jones County Junior College Bobcats’ (3-1) run game Thursday night as JCJC defeated the Wolves 35-10 in front of a ruckus home crowd. The loss moves Co-Lin to 0-2 in the South Division on the year. The Wolves are back on the road  Thursday, Sept. 28 as Co-Lin travels to Decatur to take on the East Central Community College Warriors (1-3) for another South Division matchup. Kickoff is slated for 6:30 p.m.

Action was back and forth in the opening three drives, but the Bobcats took advantage of good field position midway through the first quarter after the Wolves punted from deep in their own territory. JCJC’s Scott Phillips connected with Chancie Tidwell from 18-yards out to put the Bobcats on the board. The Bobcats recovered their own pooch kick on the ensuing kickoff, but the Wolves held JCJC to a three-and-out.

The Wolves caught a break late in the quarter after Woody Barrett broke free for a 22-yard run, but fumbled in JCJC’s territory. The Bobcats recovered, however a sideline interference penalty gave the Wolves possession once again. Co-Lin was unable to capitalize on the momentum swing as back-to-back sacks forced the Wolves to punt.

Late in the first, Jones County’s running back, Scott Phillips, got to the outside and scored on a 55-yard rush. After the point after attempt the Bobcats led 14-0 with 1:20 remaining in the opening quarter.

With 5:41 remaining in the opening half the Bobcats marched down the field on a long drive, but missed a 27-yard field goal. On the first play after the miss, Co-Lin’s Ryan Drew found a seam, and caught a 72-yard pitch-and-catch from Barrett. The big play landed the Wolves at JCJC’s eight-yard line. Unfortunately, back-to-back sacks forced the Wolves to settle for a 32-yard field goal from Griffin Subblett. Going into halftime Co-Lin trailed JCJC 14-3.

The third quarter was another defensive battle until the Wolves found the end zone for their only touchdown of the night. Barrett threw a quick screen to Nelson, who aired it out 35-yards to Kobe Gates. The double pass cut JCJC’s lead to 14-10 with 4:01 left in the third.

The Bobcats quickly responded with a 66-yard drive that was capped off with a 38-yard touchdown run from JCJC’s DeShawn Smith. The run pulled the Bobcat’s lead to 21-10.

The fourth quarter was all JCJC as the Bobcats recovered a Co-Lin fumble for a 54-yard touchdown, and scored again after Co-Lin’s ensuing drive was cut short by an interception.

JCJC finished the night with 398 yards on 69 plays with 343 of those yards coming on the ground. Phillips and Smith, who posted 128 and 127 yards respectively, led the Bobcats. Weaver was 5-for-9 in the air for 55 yards and one touchdown.