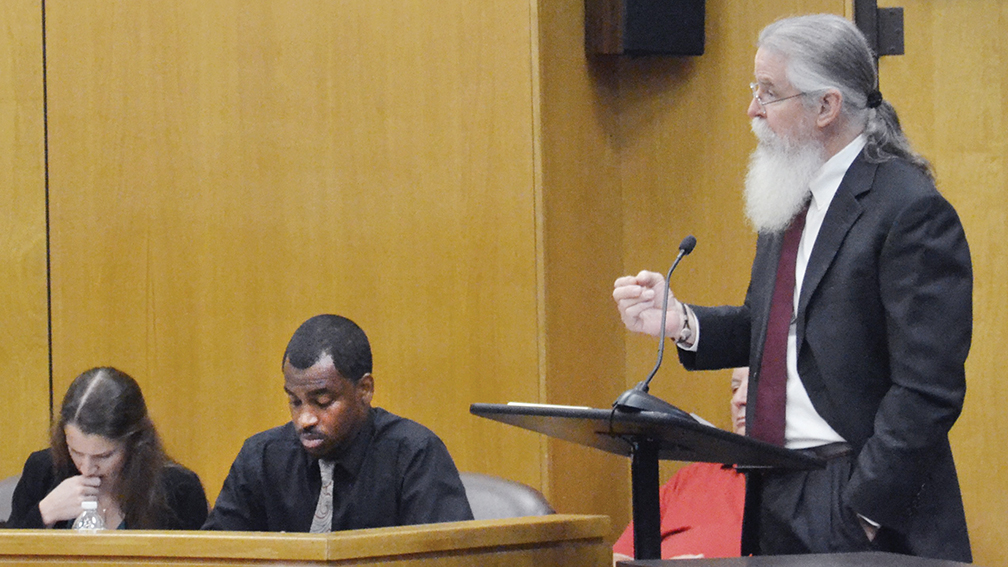 Photo by Donna Campbell/Defense attorney Tom Fortner questions a witness Tuesday in the capital murder trial of Jamaal Brown (center) who is accused of killing 13-month old Preston Heath in 2014.

The capital murder trial proceedings for a Brookhaven registered nurse accused of the murder of a toddler in 2014 began this week.

Jamaal Brown is standing trial in Lincoln County Circuit Court with Judge Michael Taylor presiding, for the murder of a 13-month-old child. The trial, which began with jury selection Monday and opening statements Tuesday, is expected to last at least five days.

On Jan. 23, 2014, Preston Jude Heath, also known as Preston Reynolds, died while in Brown’s care. When Brown was indicted by a Lincoln County grand jury, he was charged with capital murder. Brown was 30 at the time of the arrest.

The indictment stated that Heath was struck on the head in an abusive manner that caused serious bodily harm, resulting in his death. An autopsy revealed that the child’s skull was fractured and he had suffered contusions to the face. The medical examiner ruled the death a homicide.

On the day of the alleged abuse, Brown himself took Heath to King’s Daughters Medical Center, then went with the child when Heath was transferred to University of Mississippi Medical Center — where Heath’s mother was working as a nurse in the neo-natal intensive care unit. He stayed with him there until the child was pronounced dead. Brown gave a detailed report to the police and took officers to the home where the incident took place.

According to officers of the Lincoln County Circuit Court, more than 100 people responded to a summons for jury duty on Monday morning. The pool had been reduced to approximately 80 candidates by the time court adjourned for a lunch break. Shortly after 5 p.m., 14 people had been selected to serve as jurors — with two alternates — and the rest were dismissed.

Lincoln County District Attorney Dee Bates gave an overview of the case to the jurors, seated just inside the curved bar separating them from the gallery of observers in the rear of the courtroom. Well over half of the gallery’s 72 seats were occupied, with a space of two to four seats left empty in the center of each row.

The jury was comprised of male and female, black and white, with ages that appeared to range from latter 20s to mid-60s. Three black men, five white men, four black women and two white women sat in the jury seats and listened as Bates described the injuries sustained by Heath.

“The state of Mississippi will prove to you that only Jamaal Brown could have been the individual to cause those injuries,” the district attorney said.

Brown’s defense attorney, Tom Fortner of Lowery and Fortner in Hattiesburg, described Brown’s relationship with the mother of Heath as loving and caring, and noted that Brown had four children from previous relationships. Fortner said one medical expert would testify during the trial that a fall by Heath as described by Brown was not sufficient to cause the injuries that resulted in the child’s death. Another expert will testify the opposite, said Fortner, that such a fall was sufficient to cause those injuries.

“Even the medical profession can’t agree on what happened,” he said. “The evidence is not going to prove that Jamaal Brown is guilty, is a child abuser or is a child killer.”

Over the next two hours, Bates and assistant district attorney Diane Y. Jones called witnesses for the prosecution — a triage nurse, an emergency room doctor, two social workers — and introduced into evidence written reports from the witnesses and photographs of Brown’s home taken by one of the social workers while investigating the case.

Fortner cross-examined each witness on behalf of the defense, before Jones and Bates were given an opportunity to redirect questions to their called witnesses.

When the prosecution rests its case, the defense team will present its evidence against the accusations. The defense will call its own witnesses, which the state can cross-examine before Brown’s defense attorneys have an opportunity to redirect to each. Evidence will be presented for both sides.

According to law, the burden of proof is on the prosecution, and all accused parties are innocent until proven guilty in a court of law by a jury of their peers. The trial is expected to continue through at least Friday.

In a motion filed in May 2016, the defense said the state had acknowledged it will not seek the death penalty, however the alternative minimum sentence for a conviction is life without possibility of parole.

Grandson of ‘Indian Doctor’ to talk about Edgewood