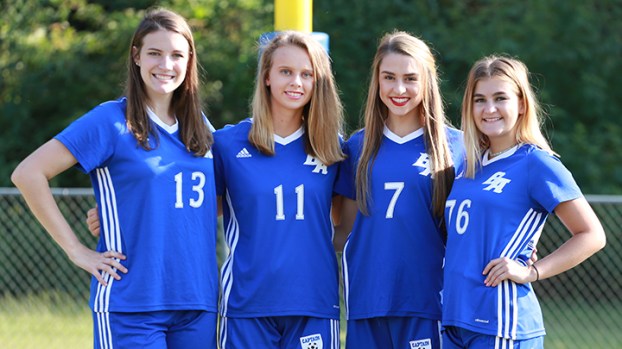 The seniors who will be honored are Madalyn Oglesby, Kaitlyn Bass, Summer Hill and Madeline Brock.

Oglesby and Bass have been starting midfielders on the Lady Cougar soccer team since their sophomore years, while Hill and Brock just starting playing soccer this year, but have earned a starting position on the team.

“We look forward to recognizing this year’s group of seniors. Madalyn Oglesby and Kaitlyn Bass have been mainstays in our midfield for three years and we are going to miss their leadership next year,” coach Mark LeBlanc said in a statement.  “Summer Hill and Madeline Brock were two girls who showed up for practices and worked their way onto the field through hard work. I am glad they played this year.  I always enjoy the atmosphere for senior night because of the energy it brings our team. The underclassmen want to send them off with a good memory.

“This year we will have a difficult task. Natchez Cathedral has only lost one regular season game this year and they are the No. 1 team in our district.  We lost to them 2-0 at their place, but we hope to use our crowd and energy to have a better outcome Thursday.”

The Lady Cougars will play a JV game at 5:30, followed by the varsity game at 6:30 on Thursday night.  Senior recognition is at halftime.

The Lady Cougars of BA defeated Discovery Christian Monday night in a hard-fought, defensive battle.  Behind a strong performance from the Lady Cougar defensive backfield and a shut-out goaltending performance from Olivia Lewis, the Lady Cougars were able to hold off a pesky opponent.  The Cougars’ lone goal came midway through the second half when Lucie LeBlanc threaded a pass through two defenders to a streaking Natalie Rials, who then powered a shot to the corner of the goal.

“Natalie is a defender that we moved up to striker in the second half to try to get a longer shot off and she really came through in the clutch,” LeBlanc said. “Natalie has one of the strongest legs on the team and is capable of a lot. I am really happy for her, she has a great attitude and works hard.   I thought we struggled in the first half and controlled the game in the second half with our defensive effort.  We need to get back to playing good defense, that’s what wins soccer games for us.”

With the win the Lady Cougars move to 8-6-1 on the year with two games left to play.