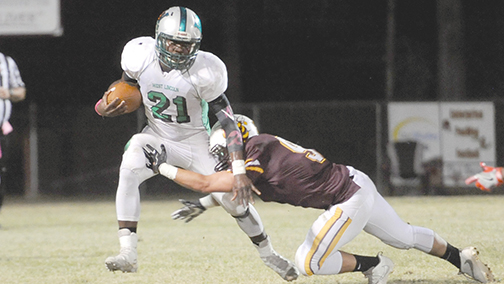 The West Lincoln (3-5, 1-1) offense, which came into their region matchup with Enterprise (1-6, 0-1) averaging 26 points per game, looked prolific on Friday night as the Bears took a 46-24 win over the Yellow Jackets at Enterprise.

The Jacket offense easily moved the ball on their first offensive drive of the game, but a fumble inside the West Lincoln 10-yard line killed the drive and the Enterprise momentum for the night. Sophomore running back Michael Brothern put the Bears on the board with a 7-yard touchdown run with 3:57 remaining in the first quarter. The Bears converted the 2-point conversion and went up 8-0. The touchdown run was set up by a 40-yard pass and catch earlier in the drive by junior quarterback Matthew Case and West Lincoln wide receiver Brandon Smith.

West Lincoln kicker Chase Owen then booted an onside kick that caught Enterprise napping. Owen kicked the ball straight down the middle of the Jacket return team and ran untouched to recover his own kick. West Lincoln capitalized with a 15-yard TD run by Case.  Another successful 2-point try put the Bears up 16-0 with 2:37 remaining in the first.

Case added another touchdown pass in the first half, this one for 25-yards to Le’Darius Jones. West Lincoln led 24-0 at halftime.

Enterprise came out of the break with their best drive of the night which was capped by a 4-yard touchdown run by junior Bryce Jackson. The touchdown run was set up by a huge run by freshman running back Jordan Stephens. Unfortunately, the game stopped for several minutes in the third quarter as Stephens suffered what was obviously a major injury to his lower leg.

West Lincoln responded to the first Enterprise touchdown with another rushing touchdown by Case that further padded their lead.

First-year West Lincoln coach BJ Smithhart was pleased with his team getting its first region victory of the season.

“Enterprise plays a physical style of football and our kids did a good job of responding to that tonight,” said Smithhart. “Matthew made some really good throws tonight and our offense found a good rhythm earlier on. We spread the ball around and got a lot of people involved and that’s something we want to continue to do.”

Enterprise travels to Loyd Star next week for a 7 p.m. kickoff and West Lincoln has an open date.