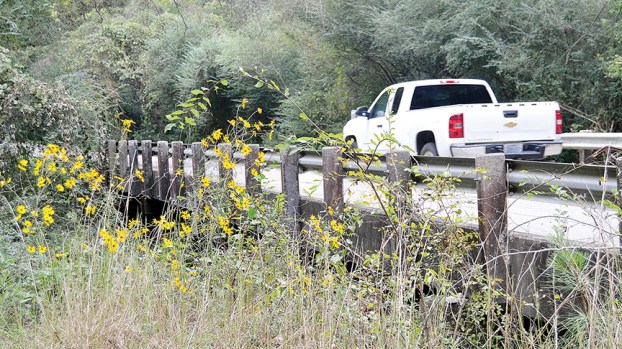 Photo by Donna Campbell/A truck crosses a concrete bridge with timber pilings on Mt. Zion Road Monday afternoon. Inspectors will likely look at 60 of the 108 bridges that include timber components by the end of the year. At least four were either fully or partially closed Friday and more may face the same fate.

Consultants are continuing their inspections of bridges with timber components in Lincoln County this week, recommending full and partial closings based on structural or safety-related situations that threatens public safety.

A bridge on Bouie Mill Road NW over Cedar Creek will be required to close in 45 days if significant repairs are not made, Holmes said.

Inspectors were back at it Monday, looking at two bridges on Mt. Zion Road and another on Pleasant Ridge.

Holmes did not have a decision on their closures Monday afternoon.

“Based on what they did last week, we’re going to have a lot of closures,” Holmes told the Lincoln County Board of Supervisors during their monthly docket meeting Monday. “Last week they inspected four and closed four. Some of them were partially closed.”

The inspections cost from $10,000 to $15,000 each, Holmes said. That money comes out of state aid funds that counties get to maintain and repair state roads.

District 1 Supervisor Jerry Wilson was upset to learn that the inspections cost thousands more than what the county had paid in the past. He thought the cost was $300 to $400 per inspection.

“We need to bring them up in this room and talk to them. That ain’t right,” Wilson. “They’re going to take that too. State aid money?”

If the inspectors determine a bridge should be fully or partially closed, supervisors have 24 hours to comply.

“Within 24 hours if they say that it has to be closed, that we send them a picture that it has either been barricaded or closed,” Holmes said. “If it’s a full closure we have to have gravel on each end and a temporary sign. If it’s one-lane closure, we can put our barrels.”

“They ought to furnish the gravel,” District 3 Supervisor Nolan Williamson said.

Holmes expects about 60 of the 108 timber bridges in the county to be inspected by the end of the year.

He said the loss of state-aid money to pay for the inspections won’t cut out the supervisors’ reseal projects but it could affect other projects planned next year.

“So in other words, they’re doing a program that’s cutting money out coming to the county that’s supposed to be fixing the bridges and the roads,” District 4 Supervisor Eddie Brown said.

“Before they inspect another bridge, we need to get them in here and we need to talk,” Wilson said. “They’re going to suck you dry then you don’t have any state-aid money, no reseal, no nothing. Then what do we do? That’s ridiculous.”

Brown blamed legislators for the predicament.

“We’ve been knowing for years the bridges are bad. But they’ve done everything but fund the bridge project,” Brown said.

However, Williamson, said it’s not the legislators in Jackson, but rather it’s the Department of Transportation that’s causing the problems.

Prior to this year, bridge inspections were paid for with federal dollars, Holmes said.

Supervisors recently voted for a $5 million bond to repair bridges and roads in the county. They should be able to start the process as early as November, Holmes said.

“We hope to start immediately,” he said. “We’ve already prioritized some that we know we need to repair. That could change depending on what’s closed and what’s open.”

The bridge closures will cause longer detours for residents who live on those roads. It could also affect first responders and school bus pickup, Holmes said.

If one piling is damaged, inspectors can close the bridge, he said. In the past, based on the county engineer’s inspections, supervisors would lower the weight limit on the bridge until the problem was corrected, Brown said.

Lincoln County has 108 bridges with some component made of timber, such as pilings. That’s the second largest amount in the state, Holmes said.

Police officers continue to search for the whereabouts of a man suspected of helping rob a Brookhaven bank at gunpoint... read more