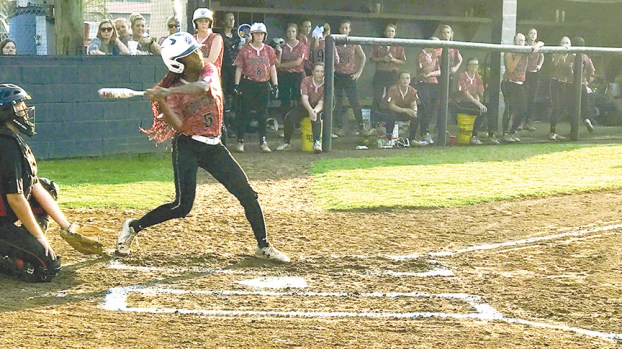 Photo by Jana Harp/Lawrence County Lady Cougars senior Tyraneshia Davis (5) hits a double against the Florence Lady Eagles in game one of the second round of playoffs Tuesday. Lawrence County will advance to the third round Saturday.

Lawrence County Lady Cougars on to round 3 of softball playoffs

The Lawrence County Lady Cougars shut out the Florence Lady Eagles Tuesday night in round two of the MSHAA slow-pitch softball playoffs in two games: 13-0 and 19-0.

The Lady Cougars were able to bring in another run off an error committed by the Florence Lady Eagles. Ty Davis brought in two runs with a two-run homerun. Maddux Kirkland brought a run in on an RBI double.

Pevey scored the final run of the game on a RBI single. The Lady Cougars carted off the victory 13-0.

In game two, the Lady Cougars’ bats came out on fire, scoring nine runs in the first inning. Kirkland got things started with a two-run RBI double.

Skyler Speight brought a run in off an RBI double. The Lady Cougars loaded the bases with two outs and Pevey nailed a two-run single.

Lawrence County added to its lead in the second, scoring one run off an RBI sacrifice by Holden. The Lady Cougars added to their lead in the third, scoring three runs.

Nations belted a two-run homerun. Kirkland followed with a two-out solo homerun. Lawrence County put the game away in the fourth inning, scoring a total of six runs.

Anna Zackery got the scoring started in the fourth, hitting a two-run RBI double. Nations followed with a two-run homerun.

Davis hit her fifth homerun of the tournament, hitting a solo homer. Wallace got the final score of the game off of an RBI single, giving the Lady Cougars a 19-0 victory.

“I’m happy with the way our girls are responding, as we are hitting the ball pretty decent right now,” said Lawrence County assistant coach Marc Howard. “They are showing team effort as they are trying to hit the ball for the girls in front of them and behind them. I’m excited that we are advancing and looking forward to the next round.”

The Lady Cougars will be in action Saturday as they take on the winner of the Newton County and Poplarville series, for round three of the softball playoffs.

The Wesson Lady Cobras will have to wait until Thursday to play the second round of playoffs due to rain... read more