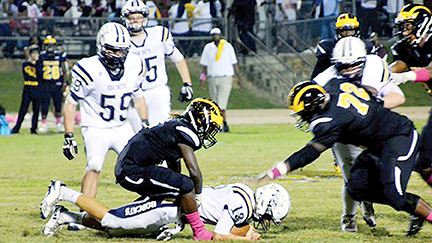 The Bogue Chitto Bobcats scored first and jumped ahead of the Amite County Trojans Friday night, but couldn’t hold onto their lead, losing 22-44 at home.

Bogue Chitto (4-4, 0-2) took on the Trojans (4-5, 3-0) on the Bobcats’ field in a district face-off. The Trojans defeated West Lincoln and then Loyd Star, each by just a touchdown. Now they’ve added Bogue Chitto to their list of wins.

Bogue Chitto scored first by completing a pass for a touchdown in the first quarter and completing a 2-point conversion to get 8-0 on the scoreboard, but just two minutes later Amite County scored on a rushing TD and their own 2-pointer to tie it up, 8-8.

The Bobcats took control again, completing a 30-yard pass for a touchdown and scoring the extra two points to make it 16-8 with four minutes to go in the first.

With two minutes left in the second quarter, Amite County’s Trojans completed a pass for a touchdown and rushed for the two-point pass to tie the teams again, this time 16-16.

The Trojans completed a pass for a touchdown in the third, jumping ahead 16-24 when the additional 2-point conversion was OK.

Amite County came in strong in the fourth quarter, completing a pass for a touchdown, and making the extra point, for a 16-31 lead.

The Bobcats came back immediately, rushing for a touchdown and adding six points.

It wasn’t enough, though, as the Trojans bumped it up to 22-37 with a rushing TD, followed by another with one minute left to go in the fourth quarter. Their extra point was good, and the Trojans ended the game 22-44.

The Bobcats will have two more games to finish off the season — both district matchups at home and both Lincoln County rivals: West Lincoln Friday followed by Enterprise Oct. 27.