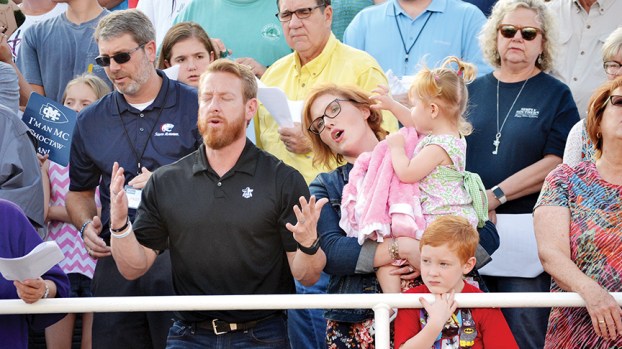 Photo by Donna Campbell/Chris Huffman, an area representative with Fellowship of Christian Athletes, worships with his family at a recent revival held at King Field at Brookhaven High School. Huffman will be the moderator at a student-led event tonight at BHS called Fields of Faith. Pictured are, from left: Chris Huffman with wife Amber, daughter Eden and son Malakai.

Students will flock to King Field tonight, but not to cheer on their teammates in a game. Instead, they’ll be celebrating athletes who are standing for their faith.

Tonight’s Fields of Faith program is aimed at students in junior high and high school in Lincoln, Copiah, Pike and Franklin counties, but the message is open to anyone to hear. Students are encouraged to bring friends, siblings and parents to the stadium at Brookhaven High School.

The 90-minute program begins at 6:30 p.m. and is led by students who are members of Fellowship of Christian Athletes.

A full worship band from The Well in Pike County will provide the music. Youth pastor Brandon Brown from Brookhaven First Assembly will be on drums.

This will be the second year BHS has hosted the national event, which is in its 13th year.

FCA’s Fields of Faith is structured as a student-to-student ministry. Peers invite their own classmates and teammates to meet on their school’s athletic field to hear fellow students share their testimonies, challenge them to read the Bible and to come to faith in Jesus Christ.

Chris Huffman, the FCA area representative over eight counties in Southwest Mississippi, said the message will be given by students, who will each briefly share their own testimony. On the program are two students from Brookhaven High School, one student from Loyd Star and another from Copiah-Lincoln Community College. A fourth student is traveling from Jackson, but is a Brookhaven native. The other five students will come from schools in Pike, Copiah and Franklin counties.

Huffman will step in to wrap it all up at the end.

Each testimony has the power to touch someone’s heart who may need to hear it, he said.

“We’ve got to speak it and encourage each other,” he said. “The language of revival is encouragement.”

Huffman said that students have a way of reaching each other in cases where adults may fail. Through the annual FCA Fields of Faith program, they’re able to tell each other it’s OK to be a Christian and lean on Jesus.

“Life is hard. Students are going through stuff that you and I would never imagine,” he said. “If we don’t give them the right solution, they’re going to find all these counterfeit ways to mask the pain.”

Parents, coaches and pastors are also encouraged to attend.

“It’s open to anyone and everyone who wants to come,” he said.

After Fields of Faith, FCA will reach out to those who either made a decision or want to know about salvation.

“Peers know how to best reach other,” he said. “The next step is to plug into local student ministry so they grow into the disciple aspect of it.”

More than 700 students attended the student-led, interdenominational outreach at BHS last year. It was the largest Fields of Faith event in the state.

“It’s something special when you see that many people come together for one cause, and his name is Jesus,” he said.

Lincoln County gate fees on the rise for athletic events

Ticket prices are on the rise for athletic events at the four county attendance centers. The Lincoln County School Board... read more