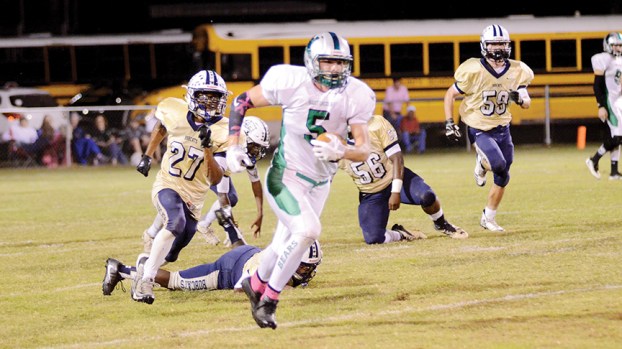 Photo by Adam Northam/West Lincoln senior Gabe Nations runs away from Bogue Chitto defenders on his way to the end zone in Friday night’s 42-8 victory over the Bobcats.

The West Lincoln Bears unleashed a big offense to take down the Bobcats of Bogue Chitto Friday night, going to the air early and often to trap the home team in a deep hole on the scoreboard from which it never emerged.

A trick play on their first offensive possession and a single catch-and-run through wide-open spaces on their third drive saw the visiting Bears climb up to a 14-0 lead early in the second quarter, leading to a second half of simple run plays and building offensive momentum that forced Bogue Chitto into a long night of risky play-calling. An impressive drive and answering touchdown by the Bobcats before halftime was not enough to slow down the white and green, and the Bobcats fell further and further behind until the horn sounded on a 42-8 West Lincoln Victory.

“That’s our kind of offense. We haven’t had a problem scoring points,” said West Lincoln Head Coach B.J. Smithart. “We’ve got some great kids on our side, and that makes it easy to call plays.”

West Lincoln senior Gabe Nations was in on a few of the big plays that helped slam the cage on the Bobcats, breaking into the clear to catch a 38-yard double pass from senior teammate Chase Owen. The nifty trick play sucked the Bobcats defenders in and all Nations had to do was run under the ball and walk into the endzone.

“You have to concentrate. You have to catch first before you think about running,” Nations said. “Once you got the ball, you get to run as fast as you can, and I don’t get to do that too often.”

Nations would find himself running like the wind a second time a couple of drives later when junior quarterback Matthew Case hit him on a quick pass in the open that Nations turned into an 81-yard sprint to the paint.

Later in the game, Case went back to Owen on a 25-yard lob into the endzone the senior receiver pulled down in a wonderful over-the-shoulder grab as he fell knees-first into the end zone. From then on, the Bears piled up rushing yards and kept the game clock on the move while Bogue Chitto tried desperately to knock a spark of the flint with a long list of passes that were mostly ineffective.

“We knew we wanted to get started fast, get our momentum going on offense,” Owen said. “Part of our plan was to get going early.”

The game was an offensive tragedy for Bogue Chitto, as their players ran with spirit and crossed into West Lincoln territory again and again, building on a multitude of first downs that turned to ashes with critical penalties and turnovers.

The Bobcats fumbled on their opening possession, then fumbled into the end zone to kill a nice drive with a touchback on their second possession. Bogue Chitto was on the verge of making the game competitive early in the second quarter after junior running back Lafredrick Dillon swept left into the end zone for a 1-yard touchdown to end a fierce drive down the field, bringing the score to 14-8, West Lincoln.

But a disaster on defense struck down the Bobcats on West Lincoln’s fourth possession when a personal foul was called for roughing the punter. The Bears had suffered a holding penalty and recovered their own fumbles twice in a row, facing a punt on fourth and 25 from their own side of the field. The personal foul gave the white and green a first down, and three plays later Owen was hauling in the rainbow for West Lincoln’s third touchdown.

“We hurt ourselves way too much tonight. When you move down there close, you just can’t turn the ball over,” said Bogue Chitto head coach Gareth Sartin. “West Lincoln took advantage of those opportunities.”

With the victory, West Lincoln moves to 5-5 overall and 3-1 in the district. Bogue Chitto falls a notch to 4-6 and winless in district play. A trip to the postseason is wrapped up for West Lincoln, and even Bogue Chitto may still have an opportunity to squeak in after next week’s district games, the final of the regular season.