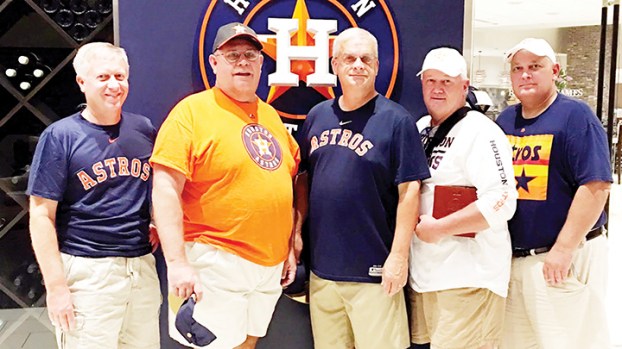 Photo submitted/Six lifelong friends have been attending Houston Astros games together for many years. Pictured are, from left: Mitch Rayburn, Keith May, Tommy Jolly, Tony Davis and Kevin Garrett at an Astros game this summer at Minute Maid Park in Houston. Not pictured is Tim Jones.

Friends from Lawrence County bond over their Houston Astros

Lifelong friends and Houston Astros fans are one win away from glory.

Tommy Jolly, Keith May, Tim Jones, Mitch Rayburn, Kevin Garrett and Tony Davis have been cheering on the Astros since the ‘70s.

With the Astros just one win away from winning their first World Series, six friends from Lawrence County reminisce about rooting for them as kids.

“When I was a kid, we would go to Astroworld, which was like a Six Flags,” said Jolly. “The Astrodome was right beside it, so while we were there we’d take in some games.”

Cesar Cedeno was an all-star player for the Astros in the mid ‘70s.

“Everyone kept saying he was going to be the next Willie Mays, so that got me and my friends influenced and hooked into the baseball games,” said Jolly.

In the ‘70s there wasn’t social media and there were limited television markets. To listen to the games, they would get in a car and try to find the right AM station.

“I can remember trying to find a signal just to hear what was going on,” said Jolly.

Davis, Rayburn and Garrett first attended an Astros games in 1973. In 1976, Jolly’s parents took all six of them together for the first time.

Since then, they were all about Astros baseball.

In 1979, they all went to Houston for the first time by themselves without their parents.

“There were six guys, one car and one hotel room,” said Garrett. “We stayed at the Holiday Inn across the street from the Astrodome. I was driving all of us down there and can remember there being a tornado coming at us and I woke everyone up. Fortunately it didn’t touchdown and we kept going.”

Before they made the trip to the game, Don Griffey’s sporting good store in Monticello made them Astros jerseys.

“At the time, the Astros were not a good team and we were the only people in the stadium besides the players who had jerseys on,” said Garrett.

Over the next decade, the college years went by and time moved on and the trips to Houston became less frequent.

In the ‘90s, the idea of making time to see each other more often started to sound like a good idea.

“We were close when we were teenagers. We grew apart in college. We were still close friends, but we’d go months or over a year without running into each other,” said Davis. “We just wanted to tie that bond between us all over again.”

It was 1996 when the group decided to go back to a game in Houston.

Since then, they pick one series a year to go to and they haven’t missed an adventure in over 20 years.

This year, they went to watch Houston play the Oakland A’s. The Astros won two of three games.

Jolly said he’s been keeping up with the team since the ‘70s.

“I went to the Ole Miss-LSU game this year and I didn’t even make it to the game, because I was in the Grove watching the Astros play the Yankees in Game 7 of the American League Championship Series,” Jolly said. “I got my priorities straight.”

“It’ll be a relief when it’s over, win or lose,” Davis said. “We want them to win so bad at this point. It’s almost wearing me out.”

Jolly said he’s ready to root for a winning team.

“I’m a lifelong Ole Miss fan as well, so we know how that goes,” Jolly said. “But if the Astros win, it’s going to be the second greatest sporting event in my life, besides when my son won a state championship in football at Brookhaven Academy.”

Garrett said he hopes all of his friends will show up at his house if they win.

“We’ll just hug each other and look forward to next year,” said Garrett.

The Mississippi Department of Education has determined there was not enough evidence to rule a former Loyd Star assistant principal... read more