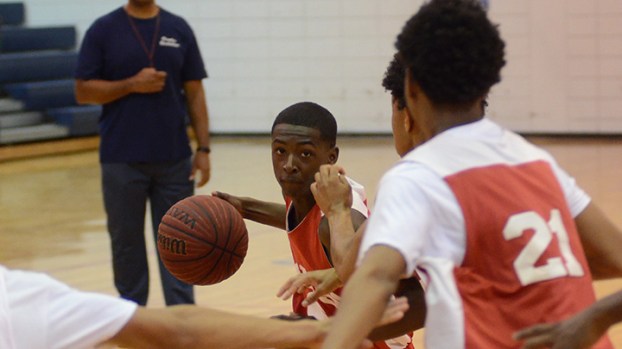 The Brookhaven High School football team has been dominant this year. They’ll take on a good team at West Jones this Friday and host a playoff game next week, and they could go deep into the playoffs.

First-year boys basketball coach Marcus Flippin is a big fan of the football team. He’s just not the most patient fan.

“I don’t want to rush them because they’re having a lot of success right now and I hope they make it all the way. But the minute football season is over I’m going to have a smile on my face,” he said.

Flippin is impatient because a bunch of his basketball players are in football pads right now, and he needs their size and strength on the court to execute his plan for the dribbling Panthers this season — to use their physical gifts to put pressure on other teams, tire them out and beat them down late in games.

The key pieces to that plan are the three returning players from last season’s playoff team.

Seniors Richard Marshall and Keith Robinson bring back a lot of game experience at the guard position, and junior Lafollette Bogan played a lot of minutes last season at forward. Flippin said those three players are the root of the team, and each can move the ball quickly and shoot well.

But he has to teach them to trust.

“They know the other guys haven’t got as much experience, and they have to learn to trust their teammates,” Flippin said.

The Panthers also have a promising group of younger players. La’darius Thrasher and Cedarius Brothern are freshmen Flippin is counting on, and sophomore Piedro Wilson has great quickness and gets tall in the air. Junior Isiah Wall can be a shooter, and Flippin is encouraging him to pull the trigger.

Three more players Flippin will add to his roster when football season is over are juniors Axavian Jones, John Hilbert and Don Blandon, and sophomore Kadarius Wells.

It will be Blandon’s first year on the team after previous unsuccessful tryouts. Flippin signed him up at the urging of assistant coach Steven Keys, and why the junior has never made the roster before is a question that leaves Flippin scratching his head.

“He’s the kind of guy you want in the gym. He wants to go 100 percent all the time,” Flippin said of Blandon. “We went to summer camp and this guy was beating people up. I’m anxious to see him play this year.”

Blandon and his pigskin-playing teammates will flesh out the roster with great physical skills and give Flippin the big rotation he needs to keep fresh players in the game.

“We’re going to try our best to work everybody to death,” he said. “We are going to take advantage of our numbers. We’ve got 11 guys coming at you, pushing the ball around, and that’s going to wear you down. It’s not going to be any secret — you play us, the pressure is coming.”

Flippin will turn the defense loose to pester opposing offenses, and he’ll use the same approach when the Panthers have the ball, too. The cats will be looking for fast break opportunities and will play up-tempo on offense.

“There’s not going to be a lot of walking the ball up. We’re going to keep attacking,” Flippin said.

The biggest challenge for the Panthers this winter may not be on the court. It may be on the bench.

With such a big roster and plans to rotate, Flippin said his team has to buy into a philosophy of cooperation and team play. As long as everyone is throwing down maximum effort, it shouldn’t matter.

“You may not get to play the whole 32 minutes. But if you go hard as you can, you’re going to need a blow, and you’re going to want one if you’re really putting out,” he said. “There’s no superstar here — everyone has to buy in, everybody has to participate. Once we buy into the team concept, we can win a lot of ballgames.”