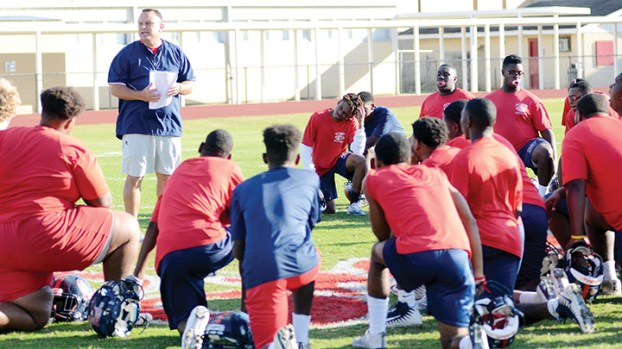 Photo by Adam Northam/Brookhaven High head coach Tommy Clopton addresses his team at the end of their final practice before postseason play. The Panthers will host Wayne County at 7 p.m. for the first round of the 5A playoffs.

Brookhaven hosts Wayne County for Round 1 of the playoffs

Wayne County’s War Eagles (6-5, 4-3) arrive in Brookhaven tonight to face Brookhaven High School in the first round of the 5A playoffs. The Panthers (10-1, 7-0) have scrapped with the combat birds many, many times in the past as region foes, and now two similar teams, led by two coaches who know each other well, will seek to end one another’s postseasons before they get started.

“Coach (Todd) Mangum and I have worked together before and been friends for close to 20 years now,” said Brookhaven head coach Tommy Clopton. “His Wayne County team won’t make a lot of mistakes, and we won’t be able to trick them or outsmart them. We’re going to have to outplay them.”

Statistically, the War Eagles will bring a pedestrian offense to town tonight. Senior quarterback Zabryan Jackson is a 44 percent passer with 700 yards and only a pair of touchdowns. He’s also serving as the team’s leading rusher, having gained more than 800 on the ground and moving along at 6.7 yards per carry.

Joshua Page, who has rushed for 498 yards and an impressive 11.6 yards per carry, leads a trio of senior running backs behind the quarterback. The team’s leading receiver has less than 20 receptions on the season.

The Ole Brook defense — led by three 60-tackle club members D.J. Durr, Byrion Robinson and Jeffery Johnson — should be in good shape for stopping Wayne County’s rush-dependent offense, and against a low-impact quarterback, senior Jemaurian Jones’s secondary should be free to man up and come forward in run support.

Of course, if Wayne County has a short field on offense, they won’t need big plays to get into position. And therein lies Ole Brook’s problem.

The Wayne County defense bathes in blood, brushes its teeth with steel wool and flosses with barbed wire.

Senior defensive tackle Quentin Bivens is 6-foot-3 and just a few hash browns shy of 300 pounds, and the Ole Miss commit is not even his team’s leading tackler. At 66 stops, 3 sacks and even an interception, he trails senior Jeremy Reed and junior Riley Revon, who have 80 tackles each. Wayne County also has a senior in the secondary who’s intercepted four passes this season, and the whole defense has collected 18 turnovers.

“Defensively, they’re as good as anybody we’ve faced,” Clopton said. “They have an Ole Miss commit up front and a few JuCo commits playing with him. This game isn’t strength vs. weakness, it’s strength vs. strength.”

If anyone can punch through the War Eagles’ defense, it’s top-seeded Brookhaven.

Senior Damarrell Leggett leads the team in rushing with 1,146 yards, and sophomore J.Q. Edwards is right behind him with 1,134. Both are moving at almost 9 yards per carry and have combined for 30 rushing touchdowns.

Junior quarterback Sevante Quinn has added to his rushing yardage late in the season, and he now stands at 514 yards on the ground and eight rushing touchdowns.

If Wayne County’s big defensive front puts the squeeze on Brookhaven, it will be on Quinn to neutralize it with his arm. He’s been a 63 percent passer in 2017, firing downfield for 1,293 yards and 19 touchdowns, and juniors John Hilbert and Don Blandon have been trustworthy targets, combining for 821 yards on 55 catches.

On paper, it would be hard for a gambling man not to like Ole Brook in the matchup. But Clopton pointed out rankings and records mean little in the postseason. In 2013, fourth-seeded Brookhaven defeated No. 1 seed Pascagoula. In 2010, Ole Brook played for championship after running through the playoffs as a No. 4 seed.

In practice this week, Clopton has stressed normalcy to his players, as he always does. The key to advancing beyond Wayne County and into the second round will be focusing on fundamental football and blocking out distractions, he said.

“Our players just have to be who they are. They just need to remember they are a solid football team and they have to play together as a team,” Clopton said. “There will be highs and lows in the game — someone is going to make a mistake. Whoever can overcome that adversity and bounce back has the best chance to win this game.”

Brookhaven hosts Wayne County at 7 p.m. If Ole Brook is successful, next week’s playoff game will either be at home against Picayune or at Laurel.

She’s traveled around playing softball all her life, but next year she’ll finally get somewhere and stay put. New Brookhaven... read more