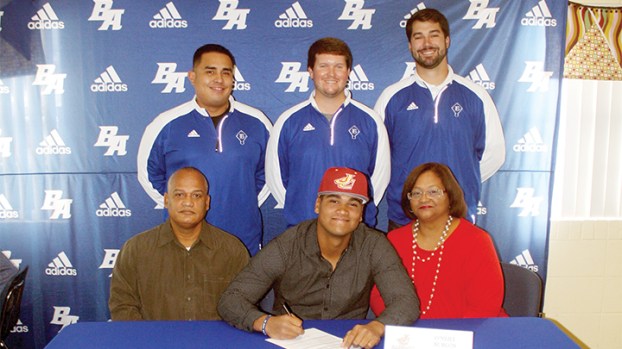 Of course, Jones County Junior College in Ellisville isn’t that far from Brookhaven — but it’s every inch the distance from Puerto Rico, where Cougars’ hitter O’Neill Burgos hails from. The big senior will swing his bat for the Bobcats next year after signing a scholarship offer Friday during a get-together in the BA library.

“They’re a young group of guys who are pumped up and want to work hard, and that’s all I want to do,” Burgos said of the Bobcats. “When I went there, I liked everything I saw, especially the commitment of the guys.”

Burgos said he’s been recruited to Jones to fill the need for a middle-lineup hitter. In one season with the Cougars, he certainly proven he can make the best of his at-bats — last season he batted .423 while driving in 30 runs and letting four homers fly over the fence.

By the time he gets to Jones, Burgos believes he’ll be even more prepared.

“I’m not the same player I was over the last couple of months,” he said. “Playing for Brookhaven Academy has helped me increase my ability.”

“Jones is getting an outstanding hitter in O’Neill,” he said. “He means a ton to our team, and he’s going to be an important member of their team, too.”

Burgos’ parents, Rafael and Omayra, made the international trip to the BA library Friday to see their son sign his college papers.

“It’s been very hard for us back Puerto Rico, to let him come live in another country,” Omayra said. “We are thankful for everyone who has helped him here.”

The Burgoses said conditions in Puerto Rico are improving after Hurricane Maria struck earlier this year, and power is being slowly restored. With conditions on the up and their son playing college baseball, they may accumulate plenty of frequent flyer miles next season.

“We will come to as many of his games as we can,” Rafael said.

The Brookhaven Academy Cougars and Lady Cougars faced a perennial contender in class 4A Presbyterian Christian School out of Hattiesburg... read more