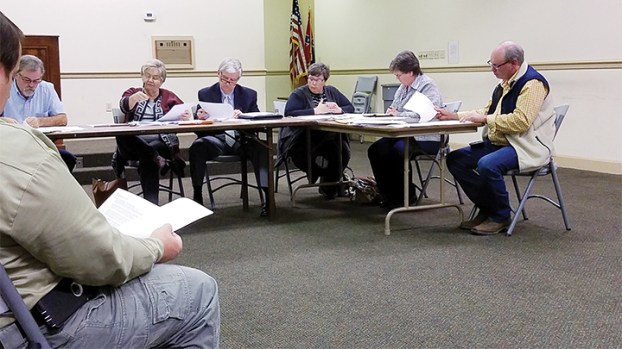 Photo by Donna Campbell/Steven Williams with the Mississippi Forestry Commission listens at a Lincoln County School Board meeting held at the State Room at State Bank Monday night. Pictured are, from left: board members Johnny Hart and Kay Coon, attorney Jim Keith, and board members Joanna Posey, Diane Gill and Ricky Welch.

The attorney for the Lincoln County School Board said the Attorney General may not have approved his plan for board members to be appointed on staggered terms through 2025, but they didn’t object to it either.

Jim Keith with Adams and Reece in Ridgeland told the board at its monthly meeting Monday that the Attorney General’s office didn’t approve his proposal per se that would get public officials’ election cycle back on track.

“But they did not object to what we are doing,” he said.

Michael Posey stepped down in January after fulfilling two six-year terms. At the time, Superintendent Mickey Myers said the board would accept applications to fill his seat until an election in November 2018. The District 5 election should have been held in 2014, but Michael Posey was elected the second time in 2010, and his term started in 2011.

His term expired at the end of 2016, but if an election was held for District 5 in November that year, that seat would have remained out of sync with the rest of the state.

He said Coon and Hart ran in 2012 for six-year terms. But to have an election in 2016 would not have allowed them to serve their full terms established by law.

“They would have only served a four-year term and by law they’re elected to a six-year term,” Keith said.

Keith said it’s not possible to hold elections for the seats to replace board members who have not served six years, just to get the schedule back on track.

“The law doesn’t work quite that way,” he said.

Keith told the board that he’s still convinced the problem began in the late ‘80s when districts went from at-large to single member districts.

“Were new terms created at that time?” he asked rhetorically. “(Circuit Clerk) Dustin (Bairfield) said his records don’t go back that far.”

Keith said his plan was accepted by the school board and it was “done with full dialog” with the AG’s office.

“Nobody is trying to pull the wool over anybody’s eyes,” he said.

He said questions have been raised about the proposal and he plans to meet with the AG’s office in the next few weeks to come up with a solution.

“Now we’re working to see if there’s a better and quicker way” while still following the law, he said.

Keith plans to give the board an update at the Dec. 18 meeting.

“Hopefully, we’ll make some more headway on that,” he said.

Repairs to a couple of major county roads bisected because of bad bridges could begin before Christmas, as long as... read more