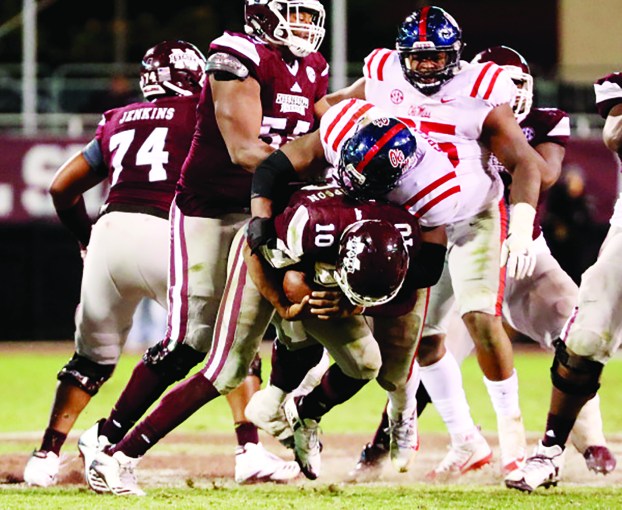 Thanksgiving night wasn’t supposed to play out like this. It just wasn’t.

Mississippi State came into the latest rendition of the Egg Bowl as a two-touchdown favorite, and some Vegas lines liked the Bulldogs even more over Ole Miss when they first came out at the beginning of the week.

And for good reason.

Mississippi State, at 8-3 overall, was coming at the Rebels with the SEC’s third-best rushing offense led by the league’s fifth-leading rusher in 6-foot-5, 230-pound quarterback Nick Fitzgerald and a 900-yard rusher in Aeris Williams. Ole Miss hadn’t really stopped anybody from running the ball all season, ranking last in the league and 123rd nationally in that category.

The Bulldogs were also in their comfort zone amid nearly 60,000 cowbell-clanging fans at Davis Wade Stadium that were going to make it difficult for Ole Miss’ offense to think much less operate effectively. Ole Miss had won just once in Starkville in the last 12 years, and with the 14th-ranked Bulldogs having most of the pieces back from the team that gave Ole Miss a 55-20 beatdown last season in Oxford, an upset seemed highly unlikely if not improbable.

The Rebels caught a break when Fitzgerald went out early in the first quarter with the kind of gruesome leg injury that anybody hates to see, but Mississippi State still had success moving the ball on the ground with fleeter-footed backup Keytaon Thompson, who had 121 of Mississippi State’s 294 rushing yards and a touchdown. But Ole Miss forced five turnovers to negate the Bulldogs’ 501 total yards, something the Rebels hadn’t done since pulling off another upset — Alabama — in 2015.

Ole Miss produced its usual big plays in the passing game with a 58-yarder early, a 77-yard touchdown by hometown kid A.J. Brown and a 63-yard score by DK Metcalf. But the Rebels also got explosive plays from the running game against a Mississippi State defense that began the day fourth in the SEC against the run. Jordan Wilkins went for 110 yards and two scores on just 14 carries, including a 46-yard touchdown that gave Ole Miss its biggest lead at 30-13 midway through the fourth quarter.

So once Wilkins recovered Mississippi State’s final onside kick with 1 minutes, 4 seconds remaining after the Bulldogs made things interesting, it was the underdog that was ready to celebrate. It was Metcalf running around the Davis Wade Stadium turf waving an Ole Miss flag, and it was interim coach Matt Luke and the rest of his players hoisting a Golden Egg trophy in front of the Rebels’ contingent of fans in the southeast corner of the stadium.

It’s been well-documented that Thursday’s game was the end for Ole Miss this season even though its 6-6 record is good enough for a bowl game. That won’t happen because of the NCAA investigation, and there may be more sanctions coming whenever the NCAA’s Committee on Infractions decides to hand down its final ruling in the case.

A coach also has to be hired if athletic director Ross Bjork decides to go in a different direction. Did the job Luke did this season stabilizing a program in turmoil strengthen his candidacy for the permanent one?

All of that uncertainty should start to clear up soon, but Ole Miss won an unlikely Egg Bowl on Thursday. That’s good enough for now.