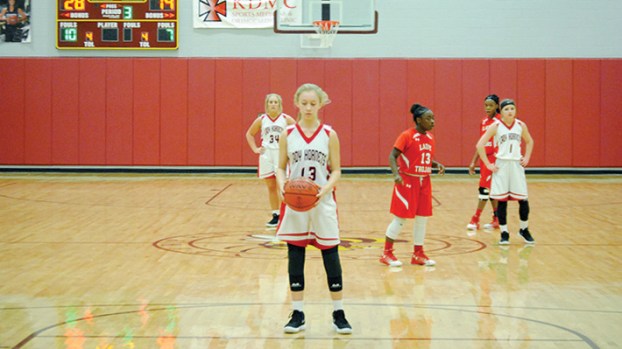 The Bogue Chitto Bobcats swept both girls’ and boys’ games against Sacred Heart Monday afternoon, opening the Lincoln County Invitational Basketball Tournament at Enterprise with a pair of victories for local fans.

The Lady Bobcats dominated Sacred Heart 66-19, while the boys rallied late in the fourth quarter to beat the Crusaders 54-53.

“Everyone got some playing time, but we have to continue to get better each game,” Lady Bobcats coach Christi Terrell said.

Despite Bogue Chitto getting on the board first and took off on an eight-point run before the Lady Crusaders could find the net. The Lady Bobcats took a 20-6 lead into the second period by winning the rebound wars.

Bogue Chitto showed no sign of slowing dow at the start of the second period, as they continued pounding onto their lead to hit 26-6 with just two minutes gone. The Lady Cats’ defense stirred up trouble for the Lady Crusaders, as the visitors from Hattiesburg were unable to score another basket until just over four minutes remained in the half. The Lady Cats took a commanding 38-9 lead into halftime.

The Lady Cats’ offense stayed hot to open the second half, building on their lead. The Lady Crusaders attempted to cut into that lead, only to see the Bogue Chitto defense halt their efforts. By the time the third period ended, the Lady Cats found themselves up 50-19. Sacred Heart could not budge them, and Bogue Chitto cruised to a 66-19 victory.

The boys’ game started as a back-and-forth defensive affair, and it wasn’t until the 5:30 mark that Bogue Chitto scored the first points of the game.

Sacred Heard quickly responded, nailing a three-pointer to take the lead. Winning rebounds, Bogue Chitto was able to take the lead away from Sacred Heart to go up 8-5. The Bobcats ran up an 11-6 lead with less than two minutes remaining in the first quarter, but Sacred Heart managed to fight their way back even, tying the game at 11-all to start the second quarter.

The Crusaders broke the tie quickly, going up 13-11, and had some success on offense. With more than three minutes left before halftime, Sacred Heart found themselves up 20-13. Bogue Chitto rallied before the end of the half to take a slim 29-28 lead into the locker room.

Sacred Heart opened the third period by taking the lead away from Bogue Chitto, but the Crusaders were unable to hold it long, as Bogue Chitto’s offense and defense fought back to grab a 34-31 lead. That was the last time Bogue Chitto lead in the third, as Sacred Heart managed to take a 44-42 lead into the final period.

Sacred Heart’s offense once again opened up a period by scoring and adding to their lead. With more than five minutes remaining in the game, Bogue Chitto clawed their way to a tie, and only one minute left in the game, both teams were once again tied at 50.

But the Bobcats made the most of the game’s final 60 seconds, adding four points and holding Sacred Heart to three for the 54-53 victoy.

With time expiring, and trailing, Bogue Chitto fought to the end, taking a 54-53 win.

“We’re a little shorthanded, but we played well and fought throughout the whole game. Despite what we have been doing, we played a pretty good game against a well-coached team. We still have a lot of work to do, but we’re heading in the right direction,” Bogue Chitto coach Mark Pitts said.