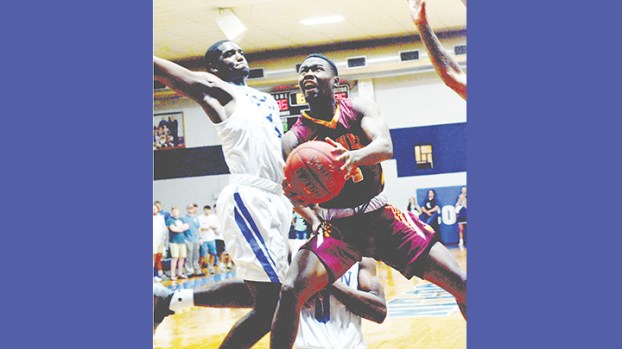 Photo by Adam Northam/Jones County freshman Winceton Edwards (right) flies into the lane against Co-Lin sophomore Darrian Wilson for a layup attempt Monday night during the Bobcats’ victory. It was the Co-Lin men’s first loss of the season.

Copiah-Lincoln’s men burned bright but then burned up against Jones County Monday night, surrendering a 10-point second-half lead to lose their first game of the year 73-62.

After exploding out of halftime on a 6-0 run to lead 36-26 with a little more than 18 minutes remaining, the rest of the game for Co-Lin was like a leaky jug, with the lead slowly dwindling until it went over to the Bobcats early in the fourth quarter and never came back. The Wolves snapped and snarled to stay in the game, but the Bobcats went on a 14-4 run in the match’s final four minutes, scoring in transition and pouring on defense pressure to dry up Co-Lin’s baskets.

“We just couldn’t be ourselves, couldn’t play the same ball we usually play,” said Co-Lin freshman and Brookhaven High graduate Damarius Brooks. “They made a run at the end and caught us playing bad defense, and we couldn’t slow the game down.”

“It felt like we got out-rebounded. They got some key rebounds at the end we should have had, and it seemed like it transferred all the game’s energy over to them,” he said.

The difference was possessions. Jones County recorded 10 steals and 18 turnovers, while Co-Lin managed only four takeaways but lost the ball a killer 24 times.

“We did some things that were uncharacteristic for our team. We made some bad decisions,” said Co-Lin coach Kenny Bizot. “The bottom line is we didn’t get the tempo like we wanted it and we didn’t read things quick enough. We have to read a defense a lot better.”

Jones County coach Randy Bolden said he thought his defense played its best game of the year so far, saying his defenders had key stops in the game’s pivotal moments and executed the game plan well.

“We rebounded the ball and limited them to one shot per possession, and I think that was the difference in the ball game,” he said.

Jones County breaks even at 3-3 with the victory. The Bobcats travel to Clarksdale to take on Coahoma tomorrow night.