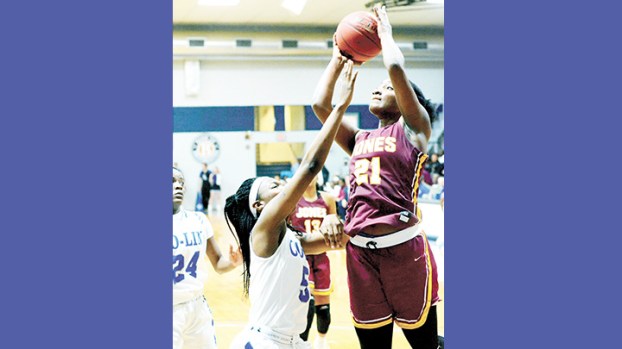 The Lady Wolves dropped their first game of the young basketball season Monday night, losing to a nationally ranked Jones County squad that held them at arm’s length all game before pulling away in the second half to win 65-52.

A competitive first quarter was all the Co-Lin girls could manage before wilting under the size and strength of the Lady Bobcats, who took the lead away with 5:56 remaining in the first half and never surrendered it again. The Lady Wolves mounted several comeback attempts and got hot shooting in the third quarter, but Jones County cooled them down fast with gritty defense and easy layups to keep the home team under pressure and get out front by double digits to slide into the victory.

“I just feel like our offense wasn’t there, and the defense wasn’t like it was supposed to be,” said freshman T’Kyra Hicks of Greenville. “Our communication was missing.”

Hicks led her team in scoring with 16 points. Ten of her points came early in the third quarter when she led her team’s fiercest comeback attempt, hitting a pair of big three-point shots, sinking two free throws and a two-pointer to close the score to within five points.

But the Lady Bobcats kept on shooting and Co-Lin never got that close again.

Jones County scored on nearly every possession late in the game while its pressure defense took opportunities away from Co-Lin. From late in the third quarter to the four-minute mark in the fourth, the Lady Bobcats broke into a 17-4 run and led the game by 20 points.

The Lady Wolves kept on attacking, but trailed by double digits throughout the fourth quarter.

“To me, the easy layups we let them have were the main thing,” said Co-Lin coach Gwyn Young. “Too many layups, we got in foul trouble and we didn’t get back like we should have on defense. And we didn’t execute on offense.”

“Any time you win at Co-Lin, it takes a big effort. This wasn’t our prettiest game, but I’m proud of our team,” she said. “We changed our defense up to keep them off balance as much as we could, but they have good guards and good shooters. It wasn’t easy.”

“Basically, we just stayed in the game and didn’t let the crowd or atmosphere affect how we played,” she said.

Cherry was second in scoring for the Lady Bobcats, totaling 15 points and dominating on defense with 15 rebounds. Sophomore Alexis Tolefree, from Conway, Arkansas, led in scoring with 17 points, while sophomore K.K. Tassin, from Terry High School, scored 11.

With the loss, the Lady Wolves remain far on the plus side in wins and losses with a record of 7-1. They’ll host Delgado Community College at Mullen Gymnasium on the Wesson campus Saturday at 1 p.m.

The Lady Bobcats, ranked the ninth best team in NJCAA Division One preseason, improve to 5-1. They travel to Clarksdale Thursday to face Coahoma and to Tuscaloosa, Alabama on Saturday, Dec. 16 for a rematch with Shelton State, the only team to defeat them so far this season.