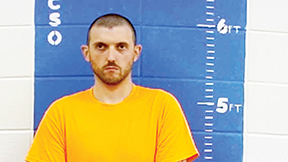 Captured Lincoln County felon may go back to prison

A convicted felon arrested Tuesday after a weekend shooting could be sent back to prison to finish his 20-year sentence for manslaughter, authorities said.

The shooting allegedly occurred following a dispute by Hammond and a “friend of a friend” over property, Rushing said. The incident occurred at the home of the mutual friend between Bogue Chitto and East Lincoln, he said.

Hammond, 29, of the 400 block of Harmony Road in Crystal Springs, was taken into custody about 8:30 p.m. during a traffic stop on Bogue Chitto Drive near Hwy. 583. Rushing said the sheriff’s office had been given information about Hammond’s whereabouts.

“We knew the vehicle he was in and watched for it,” he said.

The victim was treated  Saturday at King’s Daughters Medical Center then transferred to University of Mississippi Medical Center for surgery for injuries to his leg.

Rushing said Hammond remains in Lincoln County Jail and is not eligible for bond. His 10-year suspension on the original 20-year manslaughter conviction could be revoked.

Snow is a possibility Friday; area under winter weather advisory

Temperatures today will reach the mid-40s before hovering at freezing tonight, which could bring snow, according to a meteorologist with... read more