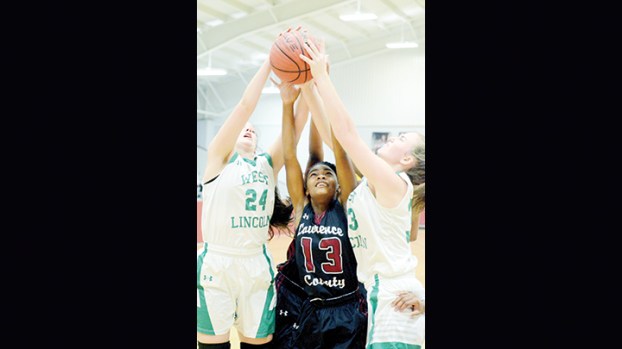 Photo by Adam Northam/Lawrence County junior Jakiara Buckner gets in between West Lincoln sophomore Bailey Wilson (left) and junior Katelyn Dickerson in a fight for the basketball Tuesday night during the Lady Cougars’ 59-32 win over the Lady Bears.

Lady Cougars’ defense too much for West Lincoln

Lawrence County’s girls played a lights-out second half against West Lincoln Tuesday night, running off and leaving the Lady Bears in a 59-32 victory.

The Lady Cougars come out of the locker room and put a tight first half out of their minds, turning up their high-pressure defense to create steals and easy baskets in transition during a 38-14 run across the final two quarters. The game got out of reach for the West Lincoln girls by the start of the fourth quarter, when a brutal stretch of stiff Lawrence County defense kept them on the wrong side of the court too long and allowed the Lady Cougars to take shot after shot.

“We didn’t play as good in the first half, so when we went into the locker room we made adjustments,” said Lawrence County junior Kyunna Thomas. “In the second half we did what we had to do and got those rebounds.”

The Lady Cougars’ speed appeared to catch the Lady Bears off guard as the third quarter began. Lawrence’s girls turned a pair of quick steals into baskets and they were off on a 12-4 run in the third period’s first three minutes. When Thomas nailed a deep three-pointer to increase the lady cats’ lead to 31-20, the Lady Bears called a timeout to stop the run.

But it didn’t stop. After owning the third quarter 18-8, the Lady Cougars used the same nose-to-nose tactics on defense to run up a 20-6 score in the fourth, trapping the Lady Bears on the Lawrence County side of the court for a fatal stretch early in the quarter for steals, shots and rebounds.

With the score at 55-28 and 3:22 remaining in the game, West Lincoln waved the white flag and sent in its reserves. The Lady Cougars called a timeout and sat their own starters, and the younger girls from both squads earned some precious experience on the court as the clock fell down toward the 59-32 Lawrence County victory.

“We always work on defense in practice, so we knew we had to slow the game down and take the shots we wanted,” said Lawrence County senior Jakya Dampier. “Our press defense really helped out.”

The second half was a stark contrast to the first, when West Lincoln’s zone defense kept the she-cats out of the paint and forced them to take long-range shots. The Lady Cougars led by only three points at halftime, as the Lady Bears’ no-nonsense defense allowed them to stay close, 21-18.

“We just realized the ball was not going in the hoop for us. We had to do a better job of intensity on defense, so I challenged the girls to get after them on the floor,” said Lawrence County coach Vicki Rutland. “We had to get some layups, some higher-percentage shots. The girls responded and they got after it.”

Lawrence County senior shooter Camryn Davis led her team in scoring, totaling 18 points and grabbing 10 rebounds. Thomas was right behind her with 17 points that included a pair of three-pointers.

Juniors Katelyn Dickerson and Elizabeth Stogner, and sophomore Bailey Wilson, all had two points each. Stogner limped off the court with an apparent lower leg injury after getting into a tussle with a Lawrence County defender on the final possession of the first half. She was later seen with an ice pack on her ankle and did not return to the game.

“We followed the game plan in the first half and we were right there in the game,” said West Lincoln coach Brooks Smith. “But you gotta make shots. At times when you can’t stop the other team on defense, you have to make shots. They made shots and we didn’t — you can tell several of the Lawrence County girls have put some time in practicing on their own, and we have to do that, too.”

With the victory, the Lady Cougars’ stellar season continues, and they now stand at 9-1, with their only loss coming at the hands of Brookhaven. The loss drops the Lady Bears to 3-3 on the year.

The Daily Leader sought to interview the top-performing West Lincoln girls from the game, but head coach Brooks Smith has prohibited his players from speaking to the press.