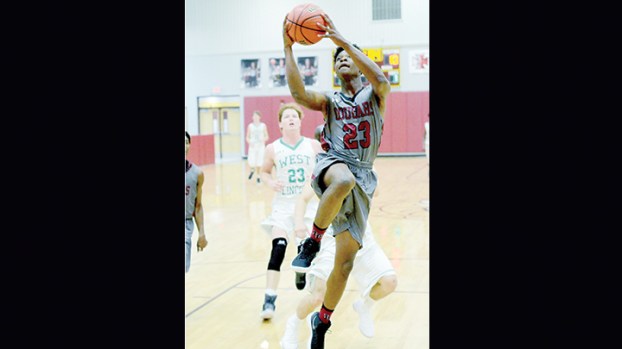 Photo by Adam Northam/Lawrence County senior Kendarius Feazell goes climbs the stairs to the basket Tuesday night in the Cougars’ 59-56 win over West Lincoln. Feazell would go on to hit the game-winning shot in overtime with less than three seconds on the clock.

The Lawrence County Cougars won a last-second thriller over West Lincoln Tuesday night, hitting a jump shot in the final seconds of overtime to snatch the victory 59-56.

With only seconds remaining, Lawrence County inbounded the ball to senior playmaker Reggie Statham, who drove into the paint and collected most of the Bears’ defenders before kicking the ball out to senior Kendarius Feazell, who had managed to sneak to the corner undetected. With a clear look at the basket, Feazell elevated and released a fatal three-point shot that left West Lincoln only 2.4 useless seconds on the clock.

Statham said the play called for him to attack the basket in hopes of drawing a foul, but when he saw Feazell alone at the arc he sailed the ball out instead.

“You gotta see everything on the floor, and I saw (Feazell) at the last second. I always trust in my teammates,” he said.

Feazell’s game-winning shot capped off what was a shooter’s night for both teams, as Cougars and Bears alike rained down shots from inside and out in a complete, well-played game. West Lincoln held Lawrence County’s athleticism in check with sound basketball, and the Cougars responded to the slower pace with fine passing and sharp shooting.

Lawrence County was in command in the middle of the game but failed to put West Lincoln away. The Cougars looked like they might pull away after working up a 29-13 lead with 2:53 remaining in the second quarter, but sophomore Bear Karlton Byrd got loose in the center of the Lawrence County defense and did big-time damage, cutting the cats’ halftime lead to 29-21.

Both teams’ offenses kept firing early in the third quarter and West Lincoln had to chase points to stay alive, but the Bears finally tied it up at 42-all with 6:20 remaining in the game on a three-point bomb from senior Ledarrius Jones. West Lincoln junior Garrison Coffey nailed his own three-pointer with 4:18 remaining to put the Bears on top 45-42, but Lawrence County fought back.

With the game tied at 49-all and 20 seconds remaining in the contest, West Lincoln’s Jones drove in close and collected a foul, hitting both his bonus shots to give the Bears a 51-49 lead and leaving only five seconds on the clock. The Cougars were in a tight spot, but Statham launched his own assault on the basket and was fouled, hitting both free throws to tie it up at 51-all with only two seconds on the clock.

West Lincoln was unable to get a two-second play inbounded and the game went to overtime, where the four-minute fight was finally ended by Statham’s assist to Feazell for the winning shot.

“I would love to say it was by design,” Lawrence County coach Pat Bridges said of his team’s game-winner. “The plan was to penetrate, but once Reggie got inside he found Kendarius open. This game was really close — just one of those games where two good teams are playing.”

Bridges said his players might have taken West Lincoln for granted after beating them 63-56 in the season opener on Nov. 2.

“We were very fortunate to get to overtime,” he said.

West Lincoln coach Brooks Smith said he was proud of his team’s effort and never-quit attitude, especially when the game turned sour in the second quarter.

“We were down 19 points at one point, and it’s hard to come back from that. Having said that, we did come back, but we can’t dig a hole like that against anybody,” he said.

Senior Triston Peyton led the Cougars in scoring with 20 points, collecting nine rebounds along the way. Statham was second in scoring with 17 points, gathering up five rebounds, two steals and four assists, one of which was the back-breaking kick-out to Feazell for the win.

For West Lincoln, Jones led in scoring with 19 points, while senior Donterrius Taylor backed him up with 14 points and four rebounds. Byrd scored 11 points, while senior Adam Martinez and Coffey each scored six. Martinez grabbed six rebounds and two steals while Coffey stole two basketballs himself.

The victory improves the Cougars to 4-5 on the season, and they’ll be back in action at the Lincoln County Invitational Basketball Tournament Friday night against host Enterprise.

The Daily Leader sought to interview the top-performing West Lincoln players from the game, but head coach Brooks Smith has prohibited his players from speaking to the press.