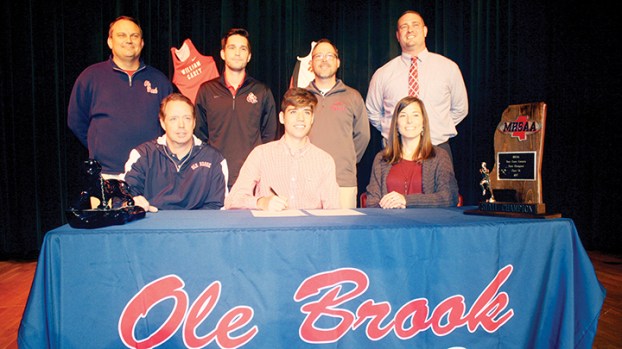 Brookhaven High senior Andrew Knott will lace up for the Crusaders in 2018 after signing a scholarship offer from William Carey University Wednesday morning in a small rite in the BHS auditorium. Knott has been verbally committed to WCU for several weeks.

“This makes it official. It will be a fun experience to keep on running in college and, hopefully, do some good there,” Knott said.

Knott is the reigning 5A cross-country state champion. He finished first out of 162 runners at the state championship meet on Monday, Nov. 6, running the 3.1-mile course in 16 minutes, 43 seconds. Fellow BHS senior Adrian Lockwood finished second and all the Ole Brook runners finished high enough to earn Brookhaven the team championship as well.

The championship and college scholarship are big achievements for a fellow who, by his own admission, “wasn’t really into” running when he first joined the team.

“The first three or four years he would do what you asked him, but he really didn’t care too much,” said Shannon Knott, Andrew’s father and the assistant BHS cross-country coach. “But he came to me after his sophomore season and asked me, ‘What do I need to do to get there?’ He made the decision to get better.”

“We expect him to make an impact immediately,” he said. “He’s a good character guy and clearly a good athlete as well.”

When he gets to WCU, Knott will become the fourth Ole Brook graduate on the college’s running rosters. Arnancy Arnold and Antonio Dillon are freshmen on the school’s track and field and cross-country teams, while Kenneth Bellamy is a freshman on the track and field team.

“I speak highly of Brookhaven High and the quality of the student-athletes. They’re well-rounded and show maturity going into the next level,” Hegstrom said.

Knott is one of five seniors leaving the Ole Brook cross-country program, leaving behind some big shoes for the underclassmen to fill next season. Head coach Kevin Bower will have plenty of coaching to do, but is more than happy to send one of his runners to the next level on a scholarship.

“It’s great for the younger teammates to see. It gives them something to look forward to, something to strive at and a goal to achieve,” he said. “It’s great to see our program grow.”

Knott’s mother, Cathe Knott, said she was excited to see her son heading off to college on a scholarship, but she’s also having mom-moments about her runner leaving home.

“I know he’ll do great. He has worked so hard, especially in the past two years, not just in cross-country but in everything he does. He’s very determined,” she said.

Knott’s scholarship is a major moment for local running — though Brookhaven’s team is large and well-established, the sport is relatively new across Lincoln County, with most of the schools only having established programs within the last few years.

Last month, Loyd Star senior Abby Thomas became her school’s first-ever cross-country athlete to sign a college scholarship when she put her name to an agreement with Delta State University.

Football, basketball and baseball isn’t for everyone, and Knott’s advice for other students looking for a way to compete is to give running — whether it’s cross-country or track and field — a try.

“Running is like a therapy for me,” he said. “When you’re running, nothing else really matters. If you’re stressing about school, about anything, running helps you relax.”

Lady Cougars’ defense too much for West Lincoln