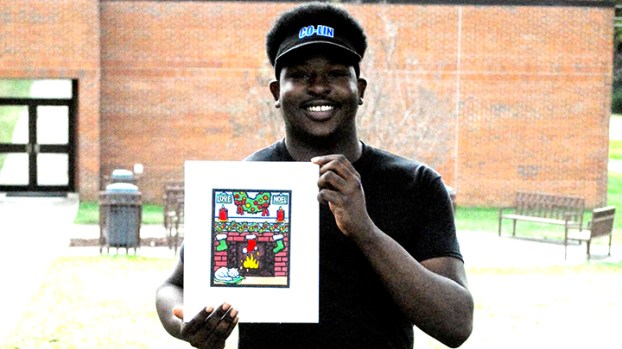 Photo by Trapper Kinchen/Co-Lin student Demarkus Miller holds a copy of his design chosen to be on the art department’s Christmas cards.

A budding artist has emerged from the sprawling woodlands of Roxie.

Ever since Demarkus Miller was a child tracing over family pictures, he has loved expressing himself visually.

“I can’t do anything else,” he said smiling.

He is a freshman in the art department at Copiah-Lincoln Community College, and, according to his professors, his work shows genuine promise.

“I wanted to do something that would have a warm feel, since Christmas is all about being together,” he said of his submission.

He was so astonished when he found out his work had been chosen that he had trouble processing the news.

“I really didn’t think I was going to get picked, because there were a lot of good things submitted,” he said. “I just had my fingers crossed.”

It’s unusual for a freshman to demonstrate the level of skill Miller used in designing his print, but Co-Lin Fine Arts Division chairwoman Janet Smith knew he was capable of producing something special.

“He came to us very talented,” she said. “He’s just a really hard working kid.”

Co-Lin instills each of its art students with the skills necessary for building a meaningful body of work, and Miller loves learning the basics.

“Right now, my favorite thing to do is still-life drawing,” he said. “We’ve been working with charcoal and ebony pencil drawings.”

He listens carefully to his teachers’ advice, and he considers them his greatest artistic inspirations.

“I’ve noticed a lot of growth since I started at Co-Lin,” he said. “It’s really amazing when I think about my progress.”

When he graduates from Co-Lin, Miller wants to matriculate to a four-year college.

“I’m open to anything,” he said. “I would be fine with going out of state or sticking around Mississippi.”

Wherever he ends up, Miller knows one thing for certain. He will continue creating art.

In the long run, he wants to delve into as many forms of visual media as possible.

The Co-Lin Christmas print represents a major milestone in Miller’s burgeoning career. It is the first work of his that will be signed, numbered and sold for a profit.

Twenty percent of the proceeds raised from Miller’s print will go to the Brookhaven Animal Rescue League, and the rest will help fund Co-Lin’s art department.

“We use the money we raise for things that might be a little outside of our budget,” Smith said. “For example, we were able to buy a 72-inch flat screen, last year, to help with presentations for art history classes.”

Each print is hand painted by art department students and faculty, and they cost $15 apiece. Contact Smith at 601-757-0194 for information on purchasing a copy.

“It feels so amazing to know that people are going to buy something I helped create,” Miller said.

The administration of the ACT, scheduled to be given Saturday at all Copiah-Lincoln Community College campuses — Wesson, Natchez and Simpson County... read more