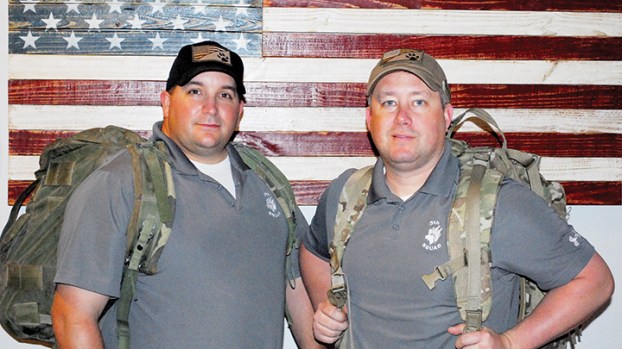 Looking at Lee Stringer and Peter Griffin, with their broad shoulders and stoic faces, it’s hard to believe just how profoundly passionate they are about charity.

Yet, beneath their brawny exteriors, beat the tender hearts of humanitarians.

Griffin and Stringer first met in 2001, while serving in the armed forces. They were stationed in Afghanistan in 2002, and both retired from active duty in 2004.

Now, they belong to 5th Squad — a statewide, military organization with roots that run deep in Lincoln County.

“When we were active duty, we saw each other all the time,” Stringer said. “Back then, it was easy to have that constant feeling of brotherhood.”

Once their time abroad came to an end, both men felt a loss of connection between themselves and other servicemen. So, in order to bolster the camaraderie they built in the military, Springer and three of his friends founded 5th Squad.

“This club is designed to keep us together,” Griffin said. “It gives us an outlet where we can go to someone who can relate to what we’ve been through.”

Since its 2016 inception, the organization has blossomed from a small group of buddies into an assemblage of servicemen dedicated to bettering the lives of those in need.

“Once we started this group, we knew we couldn’t just sit around just being a bunch of guys, doing whatever,” Stringer said. “So, we decided to do something more.”

One of the organization’s main charitable initiatives is its annual “Ruck For Rugrats” fundraiser, where club members fill their military rucksacks with donated toys and march to Blair E. Batson Children’s Hospital.

“For this year’s ruck, the sacks will probably be between 15 and 20 pounds,” Griffin said. “People decorate them with lights and ornaments, and we load them up with the toys.”

The trek to Batson encompasses seven and a half miles of open road, but the members of 5th Squad are more than happy to make the hike. Stringer said they just want to bring a little holiday cheer with the hospital’s patients.

“We, as veterans, understand what it means to be away from family, to not be able to sit in your living room with your loved ones during Christmas,” he said.

That being said, the Christmas ruck is only one example of the extensive philanthropic efforts undertaken by 5th Squad throughout the year. The group’s primary focus is connecting servicemen with one another, and — as it continues to grow — Griffin and Stringer hope to expand the club’s outreach efforts.

“We’re working with some of the shelters in Jackson, because we want to start working with homeless veterans,” Stringer said.

Next year, both Griffin and Stringer embark on fresh deployments overseas, but, because they have built a strong network of Mississippi-based veterans, they know 5th Squad will continue thriving until their safe return.

“It doesn’t matter which branch or what conflict you’ve served in, as soon as you find somebody else who has served, there’s an instant connection and shared experiences,” Griffin said.

5th Squad is a 501(c)(3) nonprofit charity, and all donations made to the club are tax deductible. See the organization’s Facebook page for more information about making a contribution, joining the group or attending any of their annual events.

A Lincoln County grand jury won’t hear the case this year of a man accused of killing eight people over... read more