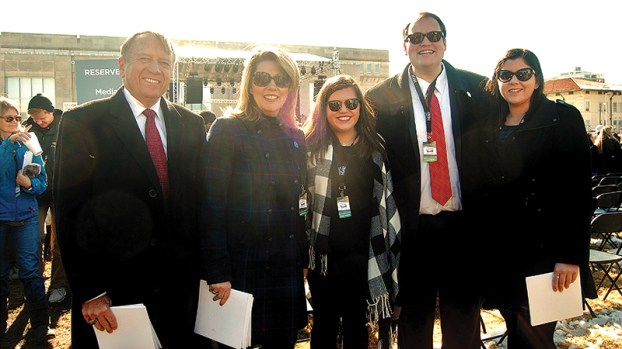 The ‘air is electric’ at Mississippi’s 200th birthday bash

The Museum of Mississippi History and the Mississippi Civil Rights Museum, a pair of educational attractions that have thrust the state into the international spotlight, opened in Jackson Saturday, culminating a year of bicentennial celebrations.

Although the official ribbon-cutting ceremony began after noon, two square blocks surrounding the site were closed to traffic as early as 7:30 a.m. while secret service personnel completed a sweep of the property. Grounds workers were also busy early morning as they dealt with a surprise addition to the program — snow. While they spread salt across sidewalks fronting the museums, Marilyn Terrell stood a few yards away in the middle of North Street offering smiles and directions. Her goldenrod scarf gave a clue: she was one of more than 420 volunteers enlisted by the Mississippi Department of Archives and History for the event.

And though most of the news reports coming out from Jackson since Saturday have focused on who attended and who didn’t, it’s Terrell and others like her who were the real story at the big birthday.

Describing the air as “electric,” the retired school teacher said the world is getting to hear the Mississippi story.

“We’re always seen in a negative light, but now we are going forward,” she said.

Terrell grew up in the Delta, where her family’s home served as a hub of civil rights activity.

“My parents aren’t featured in the new museum, but they were unsung heroes. There were lots of unsung heroes,” she said.

She went on to attend the University of Mississippi the year after it was integrated and taught in Mississippi schools for the next four decades.

“I understand that for some this is an emotional day,” Terrell acknowledged, “but I’m just excited. “It’s so uplifting to see people who want to be part of this.”

Catherine Gray wanted to be part of the festivities, even if it meant braving the cold with her toddler son, Guider, bundled up in a stroller. She stood near a platform of television cameras at the rear of the outdoor seating area.

“My husband and I consciously made a choice to raise him in this state,” she stated, referring to her son. “We want him to be a part of the new Mississippi we’re creating, one with an emphasis on racial reconciliation and really seeing the truth of our history so that we can move forward.”

“No one worked harder to make these museums a reality than he did, “Anderson said.

Winter, 94, was transported to the stage by golf cart.

Evers is the widow of Medgar Evers, a state field secretary for the NAACP who was assassinated in 1963.

“I believe in the state of my birth, and that is something that I never thought that I would say,” she acknowledged. “It is my hope that not only in Mississippi, not only in America, but across this world people will come here to study about humanity.”

Sen. Sally Doty, R-Brookhaven, said Evers’ speech was powerful: “I hope that these museums can begin to repair our reputation around the nation. Gov. Bryant referred to the words of ‘Amazing Grace’ — ‘I once was blind, but now I see’ – and I think that’s what we are communicating.”

“I want Sarah and all our future leaders to understand the pain of our past,” Doty said.

Earlier this year, Doty toured the new museums as part of the Joint Facilities Management Committee. “The history museum made us all realize how much our country has been shaped by the contributions of Mississippians. From Oprah and Elvis, to John Grisham and Greg Isles, we have tremendous people in our state. Perhaps they are our greatest resource.”

Mississippi’s former history museum was closed in 2005 after Hurricane Katrina damaged its roof. The two new museums expand the way the state’s history is presented, from its beginnings to the Civil Rights Movement and beyond. Both museums use Mississippi’s rich tradition of storytelling to showcase ordinary people who made extraordinary contributions to the state and the nation. The Mississippi Civil Rights Museum is the only state-operated civil rights museum in the nation.

The Mississippi Legislature provided $90 million for the museums. Another $19 million has been raised through private donations for exhibits and endowments. The two museums share a lobby, auditorium, classroom, collection storage, and exhibit workshop in a facility that covers a total of 200,000 square feet—the equivalent of three and a half football fields.

Private donors have created an endowment aimed at bringing every ninth-grade student in the state to visit the museums every year. At Saturday’s opening, the W. K. Kellogg Foundation announced it would match the $1 million it previously contributed to the endowment.