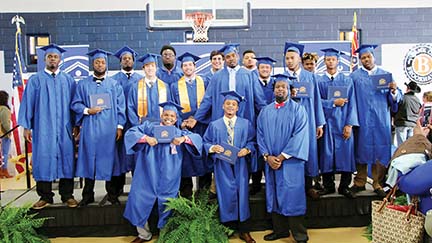 Photo submitted/A group of 22 sophomores from the Co-Lin football team graduated this December, with many moving on to four-year colleges.

For years now, Copiah-Lincoln Community College has been a leader in the Mississippi Association of Community and Junior Colleges in graduating football players in December, and 2017 was no different. Earlier this week, the Wolves boasted 22 December grads on a roster of 29 sophomores.

Student-athletes who graduate early have an enormous advantage when moving on to a four-year program in all aspects of the game, and having the ability to practice in the spring with four-year schools is highly desired.

“The big thing we talk about to our guys is making yourself marketable,” said Co-Lin head coach Glenn Davis. “Graduating in December makes our players extremely valuable to these programs that are recruiting our players.”

Co-Lin has built an atmosphere of success around student-athletes in providing opportunities on the field and in the classroom.

“Our success in graduating our student-athletes really shows the support the faculty gives us, and how they always go the extra mile,” said Davis. “This would not be possible without them and the support of our administration.”

Several of Co-Lin’s December graduates are signing with four-year schools to continue their football careers. Signing day for community college graduates is Wednesday.

Loyd Star fouls up at Wesson

The Wesson Cobras collected a week’s worth of fouls from the Loyd Star Hornets Tuesday night, living at the stripe... read more