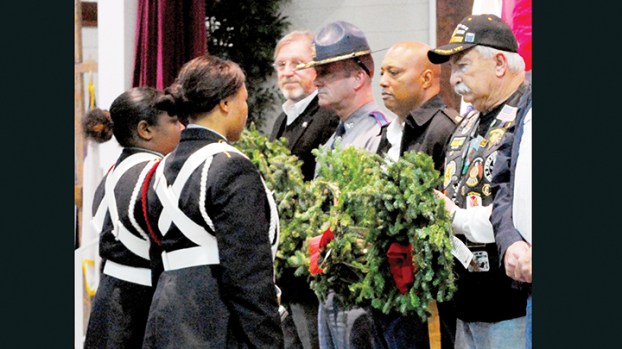 Photo by Trapper Kinchen/Several wreaths were accepted by local representatives during the Wreaths Across America ceremony Thursday at Easthaven Baptist Church. Pictured are, from left: Cambriell Haynes and Ladericka May with the Brookhaven High School JROTC, Brookhaven Mayor Joe Cox, Capt. Scott Carnigy with the Mississippi Highway Patrol, First Sgt. David A. Williams with the BHS JROTC and Patriot Guard rider Herb Littlefield.

The event held particular local significance because a special wreath was accepted by Herb Littlefield on behalf of Capt. Danny D. Entrican, who has been missing in action since 1971. He was promoted to captain posthumously.

“It is absolutely humbling and rewarding to honor our veterans,” Lewis said.

Coordinator Terrance Turner was well pleased with how seamlessly the program flowed, but said he had hoped for a slightly larger assembly.

“I thought we had a relatively modest turnout,” he said. “It was more than we had last year, but I wanted it to be closer to 300.”

The wreath-passing ceremony is special to Turner — who served with the armed forces for six years — because it encourages civilians to reflect on the sacrifices put forth by America’s fallen warriors. He said the public is always encouraged to attend, and he hopes the event will draw a larger crowd in coming years.

Wreaths Across America began in 1992, and has developed into the country’s largest military parade. Walmart trucks loaded with live wreaths depart from Maine every December and crisscross the nation, delivering yuletide cargo along the way.

Preparations for the Brookhaven ceremony start in November, and Turner’s team works diligently to pull together the program’s final touches.

“I have a lot of skilled and seasoned people who know what to do, and they do such a great job,” he said.

He also credits several area businesses and organizations for helping support the event. Turner had particularly kind words for the staff at Easthaven, saying he greatly appreciates the yearly use of their facilities.

“Also, this year, Riverwood Funeral Services did all the food,” he said. “They even did the serving, which took a major stressor off of us.”

The actual wreath-laying ceremony will take place Saturday in Hazlehurst at 11 a.m. and Wesson at 1 p.m.

Turner said the most emotional part of placing a wreath on the grave of a service member happens when he says the warrior’s name aloud.

“It says ‘You’re not forgotten,’” Turner said. “It’s not just about placing wreaths on graves, it’s about teaching and honoring.”

Wreaths Across America is designed to honor the memories of slain service men and women and educate the next generation about military sacrifice.

“The teaching part is the biggest thing,” he said. “If we could get our local schools to at least allow our seniors to come to the event, I think that would be great.”

When the bottle fire bomb he reportedly threw ricocheted off a car window, a Brookhaven man allegedly shattered the windshield... read more