The Centers for Disease Control recently published statistics indicating that Mississippi — along with several other southeastern states — is suffering from a widespread outbreak of influenza.

“It’s actually flu-like illnesses that the CDC is showing,” he said. “So, just because Mississippi is showing a high volume of flu symptoms coming in doesn’t mean it’s actually the flu.”

Some of the symptoms to which Britt is referring are fever, body aches, cough and sore throat. He said it’s wise to report to a doctor as quickly as possible if you notice any such indicators negatively affecting your health.

“The advantage of early detection is getting to receive Tamiflu, which must be administered in the first 48 hours to have any effect,” he said.

Plainly put, Tamiflu is an antiviral medication used to reduce the duration of flu symptoms.

“It may cut it down by a day,” Britt said. “For many people, because the flu is so miserable, it’s worth it to take Tamiflu.”

Even if you aren’t interested in receiving Tamiflu, Britt said it is still crucial to have your symptoms properly diagnosed.

“We need to make sure it’s actually the flu and not something more serious,” he said.

What might seem like influenza could easily be something much more precarious, like pneumonia. But with the flu season expected to last until March or April, it’s not too late to get a vaccine.

“A flu shot is still the most effective preventative tool for dealing with the flu,” he said. “On a population basis, it is estimated that we reduce the flu by 40 to 60 percent through shots.”

Sometimes, an individual will contract the flu even after being vaccinated, but Britt said the shots, by and large, help to keep the population well.

Influenza sometimes proves fatal, and Britt said certain demographics are at greater risk than others to contracting the illness.

“The people who suffer the most from the flu are the very young, the very old and sick people,” Britt said.

For those groups, a flu shot is essential to preserving good health.

Interestingly enough, the CDC bases the strains chosen for each year’s flu shot on Australia’s corresponding season. By monitoring influenza outbreaks in the Southern Hemisphere, American scientists are better able to predict which types of flu might have the biggest impact in North America.

Aside from getting a flu vaccine, Britt suggests keeping your hands sanitized and avoiding people who are visibly ill to help minimize your risk of getting sick.

“When you come home after being out in town, be sure to wash your hands really well,” he said.

In general, the best care for the flu is — as it has been for generations — to treat your fever with recommended doses of ibuprofen, drink lots of fluids and get plenty of rest.

“That doesn’t mean staying home and doing things around the house,” Britt said. “It means actually getting in bed and resting.” 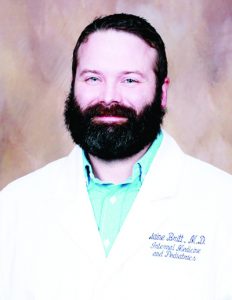 Brookhaven musicians Shaw Furlow and Tyler Bridge came up with the idea to produce a fundraising holiday album during a... read more