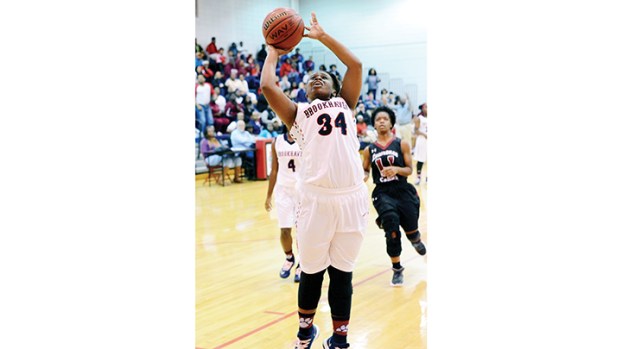 Photo by Adam Northam/Ole Brook junior Dymonde Washington takes a high-percentage shot Friday night in the Lady Panthers’ last-minute win over tough rival Lawrence County. The Lady Panthers are responsible for both the Lady Cougars’ only losses so far this season.

Ole Brook’s Lady Panthers survived against one of the best teams in the region Friday night, squeezing down on Lawrence County’s top shooter in the game’s final seconds to hang on tight for a 38-35 victory.

With Brookhaven leading 36-35 and the game clock at single digits, Lady Cougars’ senior Camryn Davis attacked inside for what could have been a game-winning shot, but three Lady Panthers collapsed on the paint and forced her to travel as she fought through their bodies. The misstep gave Brookhaven the ball with three seconds remaining, and Ole Brook freshman Ashanti Louis tacked on the game’s final two points at the free throw line to end it.

“I tried to drive in and draw a foul, but it didn’t work out,” Davis said.

The turnover was the critical play of the game, an evenly-fought contest in which neither team revealed a weakness and both stayed within a couple of baskets of the lead all night long.

Davis and her teammates beat the Ole Brook defense to score from close range throughout the game, while Brookhaven relied on hot shooters to drop baskets over the Lady Cougars’ heads.

“The first half we were kind of sluggish. We have a tendency to not start as strong as we finish, so coach told us to get after it, to always shoot with confidence,” said Ole Brook sophomore Ayanna McNairy. “Mainly, it’s moving without the ball. You have to get to your spot in a hurry.”

McNairy’s confidence netted her eight points, most of which came off a pair of long three-pointers, including one in the middle of the high-scoring fourth quarter, an 18-14 running shootout claimed by Brookhaven.

The final stanza started with Lawrence County leading 21-20, but the careful play of the game’s previous quarters turned into a basket-swap of transition layups, traded three-pointers and the occasional free throw.

“We stayed poised, didn’t get rattled. We were just trying to make certain we stayed close,” he said. “We’re fortunate to get by tonight. Lawrence County is a great team.”

“These are the lessons you have to learn,” Rutland said. “Any time Lawrence County and Brookhaven play, it’s going to be a lot more intense and emotional for both teams. We need this kind of competition heading into district play.”

Ole Brook junior Tamia Stallings led her team in scoring with 10 points, grabbing 15 of the Lady Panthers’ 24 total rebounds and ripping out five steals. McNairy and freshman Ashanti Louis came next with eight points each, while sophomore Silentianna Collins had four.

The loss drops Lawrence County to a still-fantastic 9-2 on the year, with both losses rolling off the fingertips of the Lady Panthers. Even though Ole Brook stands at an average 6-5, they apparently have a plan that works against their old rivals from Monticello.

“It makes me feel like we can beat anybody,” said Ole Brook’s Collins.

Brookhaven Panthers double up on the Lawrence County Cougars, 57-28

Like a cat playing with his prey, Brookhaven’s Panthers batted Lawrence County around Friday night, getting in a bit of... read more