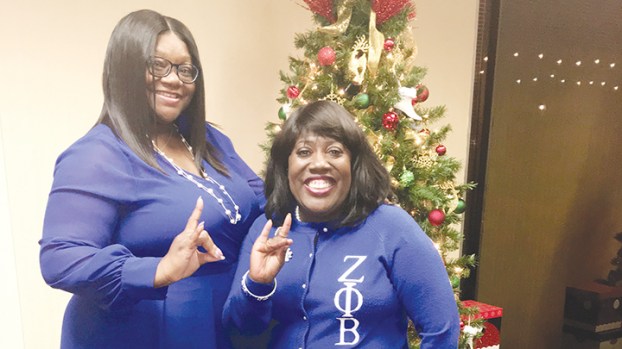 Photo submitted/Sheryl Underwood, co-host of CBS’s “The Talk,” worshiped at New Zion M.B. Baptist Church in Bogue Chitto Sunday at the invitation of Shayla Edwards. Pictured are, from left: Edwards and Underwood.

A comedienne who is usually shoulder-to-shoulder with television personalities Julie Chen, Sara Gilbert and Sharon Osbourne on the CBS daytime show, “The Talk,” took her spot in a pew at New Zion Missionary Baptist Church in Bogue Chitto Sunday to hear the gospel Mississippi-style.

Sheryl Underwood was in Jackson Saturday in support of “Sisters in Service,” an event hosted by the Pack Rat Foundation for Education, of which she is owner and chief executive officer. She attended the function with Gamma Beta Zeta Chapter of Zeta Phi Beta sorority.

She made arrangements with church member Shayla Edwards to come visit New Zion for some old-fashioned church.

Underwood’s foundation honors the four sororities of the National Pan-Hellenic Council: Alpha Kappa Alpha, Delta Sigma Theta, Zeta Phi Beta and Sigma Gamma Rho. The Greek-letter organizations are celebrated for their community service and efforts to better the lives of people around them.

Edwards and her mother, Cora, are members of Zeta Phi Beta. Underwood, a sorority sister, was the 23rd international president in 2008.

Underwood said that sisterhood helped her through some of the toughest times in her life.

Many of her sorority sisters — including Underwood — sympathized with her when her son, Austin, was shot to death in May along with seven other people.

“She reached out to me the day after it happened,” Edwards said. “She said she was praying for us and everybody that was involved in the incident.”

Edwards set up the visit to New Zion for Underwood. Her  father, the Rev. Eugene Edwards, is pastor there. Several of her sorority sisters are also members.

She said Underwood asked for “some good, down-home Baptist singing” and New Zion congregation did their best to oblige.

While at the church, Underwood took a lot of pictures and thanked everyone for such a warm welcome.

“She told us what a wonderful time that she had praising the Lord and being in such a small close-knit community,” she said.

Underwood has starred on “The Odd Couple” and the daytime dramas “The Young and the Restless” and “The Bold and the Beautiful.” She also appeared as herself on “Celebrity Name Game.” In addition, her life story was the subject of the TV One bio-documentary “Unsung Hollywood: Sheryl Underwood.”

Her film credits include “Bulworth,” “I Got the Hook Up” and “Beauty Shop,” starring alongside Queen Latifah in the latter. Underwood also was the host of BET’s “Comic View” and “Holla,” a talk show she created and produced that was loosely based on Bill Maher’s “Politically Incorrect.”

Three school board seats for Lincoln County will most likely be on the ballots for the general election in November.... read more