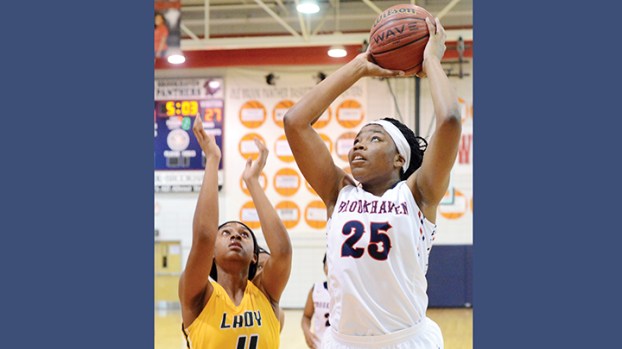 The Lady Panthers exploded into a seven-point run in just 50 seconds against McComb’s Lady Tigers Saturday night, blowing open a close game late and hanging tight for a 55-51 win.

Trailing 50-46 with 1:55 remaining in the game, Ole Brook junior Tamia Stallings laid in two points, sophomore Ayanna McNairy mailed in a three-pointer and senior Johnique James stepped to the line and hit two free throws, with the Lady Panthers forcing two straight McComb turnovers in between. By the time the clock read 1:05, the Brookhaven girls were up 53-50 and the Lady Tigers began firing misses and fouling in desperation.

“We pushed them to the sidelines and trapped them,” James said. “It was our time to win. I felt it.”

Ole Brook’s pressure defense had a huge impact in the game’s final moments. The Lady Tigers lost the ball four times in the last three minutes and gave up two more rebounds to the Lady Panthers’ defense, allowing the Brookhaven girls to go on an 11-2 run at the end of the contest.

“I was being a bull. I was going for the rebounds and they couldn’t stop me,” Stallings said. “I told myself, ‘It’s time to turn it on.’ I wanted to win.”

Stallings led both teams, by far, with 19 total rebounds, 13 of which she pulled down on offense.

The Lady Panthers’ win was earned the hard way. If the Lady Tigers had been able to sustain their play from the first quarter, Ole Brook’s girls would have been embarrassed.

Early in the game, McComb passed with rifle precision and attacked the lane while Brookhaven gave up sloppy turnovers and got clumsy on defense — the Lady Panthers were down in the foul count 6-2 before the second quarter started.

McComb’s girls went on an amazing 17-1 run over a four-minute span from the end of the opening quarter to early in the second and led the game 27-11 with 5:56 remaining in the first half.

But Brookhaven fought back hard and finished the half’s final five minutes on a 14-4 run of their own. Senior Taylor Carter and junior Miyah Miller hit big three-pointers in the last two minutes, and sophomore Silentianna Collins attacked inside for a basket and one with a single second remaining to cut McComb’s lead to six at the buzzer.

“We got out of it a little, kind of let up,” said Lady Tigers junior Ebony Gayden. “We were rushing instead of taking our time, and the shots just weren’t falling.”

The runs stopped there. The second half was a tight affair of determined basketball.

McComb’s biggest lead was 44-37 with 1:04 remaining in the third quarter. Brookhaven stayed in the Lady Tigers’ back pocket as best they could, fouling out McComb senior Chardonay Williams in the middle of the fourth quarter to set up the big seven-point burst late in the game.

“We stayed focused. Our defense got better and frustrated McComb into making some mistakes,” Wilson said. “It’s a big rivalry, so both teams played hard. And we’re going to see them again, so we gotta be ready.”

Stallings did her usual work under the rim and led the Lady Panthers with 21 points. Collins dropped in 10 points, while James scored seven. Carter and McNairy scored six points each, and McNairy led the team in assists with six.

For McComb, senior Destiny Smith led in scoring with 17 points. Senior Dellesheonia Dixon scored a dozen, while Gayden threw in 11 points. Williams got eight before she fouled out, while junior Zebreana Tucker scored two and sophomore Lexsie Hampton managed one point.

Both teams broke even on free throws, with Ole Brook hitting 13-of-26 and McComb going 11-of-23. The Lady Tigers committed 21 personal fouls to Brookhaven’s 16.

The win takes the Lady Panthers to 6-5 on the season, while McComb remains an impressive 9-2.

Brookhaven nursed a seven- or eight-point lead through most of the game against McComb Saturday night, maintaining just enough distance... read more