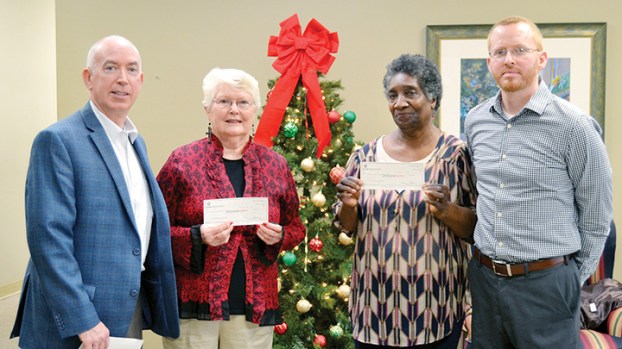 Photo by Donna Campbell/The 14th annual Holiday Food Pantry Drive collected more than $5,000 that will be distributed between five area organizations and churches that help feed the hungry of Lincoln County. Pictured are, from left: Shannon Aker, president of Bank of Brookhaven, Gwen Dyess with Union Hall Baptist Church, Floretta Williams with Greater Hope Foundation and Luke Horton, publisher of The Daily Leader.

Donors gave more than $5,000 to the 14th annual Holiday Food Pantry Drive sponsored jointly by Bank of Brookhaven and The Daily Leader.

Bank President Shannon Aker and publisher Luke Horton handed over checks Thursday for $1,040 each to two representatives of the five churches and organizations participating in the yearly drive. Gwen Dyess with Union Hall Baptist Church and Floretta Williams with Greater Hope Foundation were all smiles as they accepted their checks at the newspaper office.

Representatives for St. Francis of Assisi/St. Vincent de Paul, St. Paul Missionary Baptist Church and Bethel AME did not attend the presentation, but Aker has checks with their names on them at the ready.

Aker said although the drive is held each year during the holidays, it seemed to come faster than normal this year. Donations were slow when it started in late November, but picked up in the last week of the collections, which ended Dec. 15.

In fact, he said, some donations came in this week and were added to the final total.

It doesn’t surprise Aker that residents of Lincoln County are so willing to help their neighbors.

“It’s great that this time of year, when we expect a lot, they’re giving a lot,” he said.

Dyess said the money Union Hall received will be used to supplement the food pantry with additional canned goods.

Williams, however, said they planned to purchase meat on sale in bulk and freeze it. Meat from the Greater Hope Foundation is a rare treat for many of those families they serve each month.

The other three organizations and churches will also put their funds to good use, Aker said.

The charity, located on First Street, once operated out of a garage. But, according to pantry coordinator Jim Bonner, area support has consistently enabled St. Vincent de Paul to expand its mission.

Lincoln County has rallied around the food pantry since it began. Bonner said anytime the charity starts to run low on supplies, someone miraculously comes through with aid.

“The amount of donations have stayed about the same,” he said. “But the number of people receiving donations has actually increased.”

The food pantry serves about 175 families per month, and, according to Qualls, that number represents roughly 400 individuals who receive nourishment through Bethel’s donations every 30 days.

The pantry was established six years ago in response to an overwhelming outcry from Lincoln County’s underserved.

“There was just a need in the community, and that’s why we opened our doors,” he said.

The church relies heavily on community contributions, and every penny raised goes directly toward stocking the pantry’s shelves.

St. Paul Missionary Baptist Church at 508 N. Second St. operates one of the oldest food pantries in the state.

At between 25 and 50 families served in a month, they aren’t the biggest of the local food pantries, but they’ve been steadily serving the community since 1989.

Besides 16 anonymous donations that totaled $1,545, the food drive collected funds from:

No more snow in forecast for Lincoln County

Lincoln County has no hopes for a white Christmas, according to a Jackson meteorologist, but area merchants could still see... read more