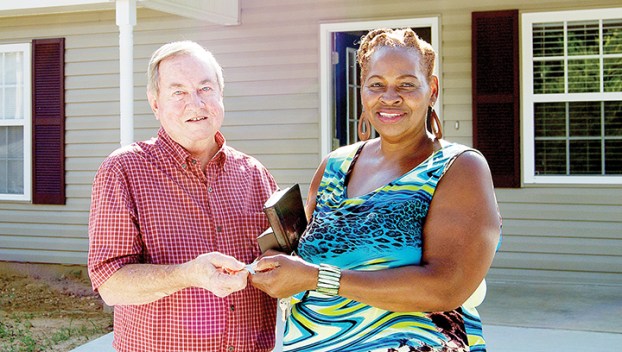 Photo by Donna Campbell/Pete Corkern with Habitat for Humanity of Lincoln County gives Ellen Catchings the keys to the new home she’ll share with her daughter, Sophia Catchings. The home was built to be wheelchair accessible for Sophia Catchings, who was paralyzed in a car crash nearly 20 years ago when she was 16.

Habitat for Humanity taking applications for next house in Brookhaven

Once again, Habitat for Humanity of Lincoln County is ready to erect a home for a worthy family in need.

“When you build a Habitat house, you get to know the homeowner really well,” building supervisor Pete Corkern said. “It is so satisfying to know that they’ve never owned their own house before and are finally getting a chance to have a place of their own.”

Much of the behind-the-scenes research leading up to the actual construction project is overseen by program Executive Director Suzanne Smith.

“We start taking applications for a new homeowner/partner in January, so we can be ready to build in June,” she said.

The responsibility of choosing a frontrunner from the pool of applicants falls on the organization’s finance committee. They review each submission thoroughly and utilize vigorous criteria in order to select an appropriate candidate.

“We try to get people who have lived in government housing all their lives and give them the chance to be homeowners,” Smith said.

Habitat for Humanity works closely with each homeowner/partner they pick. Their primary objective is always to find a suitable location to raise a dwelling, and Smith said whether the house ultimately sits within Brookhaven’s city limits or on a rural tract in Lincoln County depends on the individual homeowner.

Smith stressed that the people who get houses through Habitat for Humanity are given a hand up, not a hand out.

“They have to be able to participate in the building process,” she said. “They either participate themselves, or a family member participates on their behalf.”

Applications are collected in January because the process of procuring property and starting a building project is lengthy.

“A lot of the big cities can build a house in a week, but we can’t do that in Brookhaven,” Smith said.

To speed things up, a “homebuilder’s blitz” has been scheduled for June.

“That’s when we partner with several builders,” she said. “Our goal is to try, with the help of the builders, to get the house finished in 60 days.”

Projects also tend to move more quickly with the help of community volunteers, and Smith anticipates an onslaught of local involvement once the building process gets underway.

“For example, in the past, we have had great support from the men’s groups from churches,” she said.

“The homeowners don’t get the house for free,” Smith said. “It’s a zero interest loan, and it consists of the funds we had to spend to finish the building process.”

The typical Habitat for Humanity mortgage totals between $40,000 and $50,000, and payments are based on the homeowner’s income.

Smith emphasized that Lincoln County’s Habitat for Humanity has a strong board of directors that helps make her job much less overwhelming than it might otherwise be.

“We have a lot of support from the city,” she said.

Habitat for Humanity of Lincoln County accepts financial gifts year round, and each contribution helps a family realize its dream of owning a home. For more information on donating, contact Smith at 601-823-4061 or email her at hfhedlincoln@cableone.net.

“It is so rewarding because of the people you’re serving,” Smith said. “Serving the people of this community is what it’s all about.”

December is generally considered a month of celebration, with people coming together to open presents at Christmas and ring in... read more