Funeral services for AG Black, of Brookhaven, are Friday, Dec. 29, 2017, at noon at First United Methodist Church with burial at Riverwood Memorial Park. Riverwood Family Funeral Service in Brookhaven is in charge of arrangements.

He was born Aug. 22, 1923, in Jasper, Alabama, to Emmett E. Black and Mary Etta Black. He graduated from Jasper High School and served in the U.S. Army Air Corps during World War II as a gunnery instructor.  He was a JCPenney manager for 43 years in Alabama, Tennessee and Mississippi and was known around Brookhaven as “Mr. Penny.”

He was an active member of First United Methodist Church. He served on the Board of Trustees and was finance committee chairperson. He was the president of the Brookhaven Lions Club, chairman of the Retail Merchant’s committee of the Brookhaven-Lincoln County Chamber of Commerce and was a founding member of the Gobbler Hollow Hunting Club.

Once he retired from the JCPenney Company in 1983, he could be found fishing from a pier in Gulf Shores, Alabama, sitting in a tree stand hunting with one of his grandchildren, or traveling around the world with his wife and two daughters.  Much to the chagrin of his wife, Rosalind, he saved almost everything with plans to fix it and more often than not, he had just what someone was looking for out in his shop.

To his daughters, he served as an anchor and a model for how a man should love his wife. For his grandchildren, his kindness, gentleness and patience was balanced by a fierce devotion to those he loved. This devotion was so evident that even his great grandchildren looked to his marriage as an example of what to emulate.

This year marked 75 years of marriage to the love of his life, Rosalind Underwood. Even in his last days, a kiss from his wife brought a smile to his face. His legacy is one of sweetness, love, sacrifice and devotion.

He was preceded in death by his parents; brother, James; sister, Elanor Black; and daughter, Becky Black Morgan.

If you would like to leave a word of comfort or sympathy to the A G Black family, you may do so at www.riverwoodfamily.com. 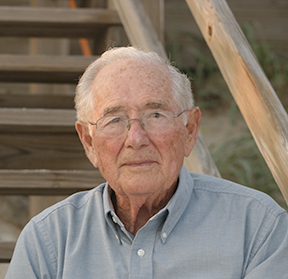