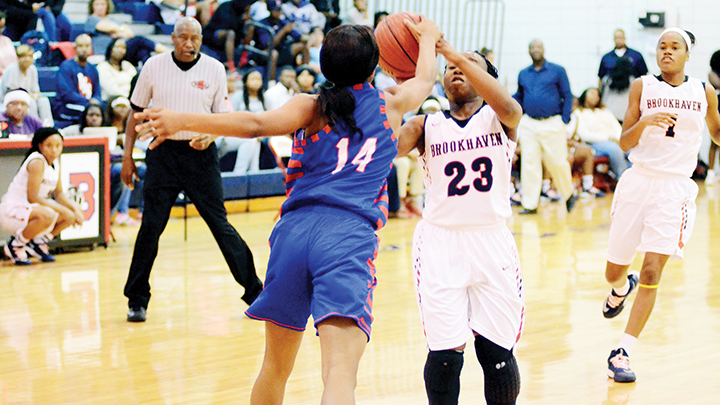 The Lady Panthers of Brookhaven overcame a sluggish start and fought their way back to a 41-36 win against Warren Central Friday night.

The Brookhaven girls have had a tendency to start wrong and finish right in 2017, and they did it against the Lady Vikings, throwing the ball away on bad passes to give Warren Central’s girls extra shots and a first-quarter lead. The Lady Panthers regained the lead at halftime, dominated the third quarter and won the fourth for the victory.

“We turned the ball over a lot and need to work on that,” said Ole Brook senior Taylor Carter. “Our shooting was off and we could’ve done better on defense. We kept the tempo up in the second half and when we keep the tempo up, we get the game in our hand.”

Three minutes passed before anyone found the net, but the first basket went to Warren Central and so did most of the others early on. Ole Brook’s turnovers gave the Lady Vikings a 12-5 lead at the end of the first quarter.

The Lady Panthers began to shake off their grogginess in the second quarter and eat into the Lady Vikings’ lead. Brookhaven’s defense created turnovers and the extra opportunities led to a 20-15 lead at halftime.

Both teams attacked hard in the third quarter, but Ole Brook’s three-point shooters came alive and made the game competitive. The Lady Panthers took a slim 27-26 lead into the final period.

The fourth quarter saw more lead changes before Ole Brook tightened up and got the edge. Defense made the difference late, as the Lady Panthers used their pressure defense to shut down Warren Central’s last few chances and win 41-36.

“This was a hard-fought defensive game and we were able to make a push down the stretch. Our depth helped us out,” said Lady Panthers coach Preston Wilson. “We were able to contain Warren’s Amber Gaston, which helped us.”

Brookhaven will next play on Thursday as they take part in the McComb Coca-Cola Holiday Tournament, playing against Tylertown and McComb.

Warren Central will be action on Jan. 5 as they take on Greenville.