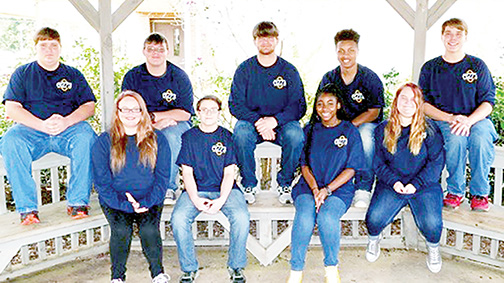 We live in an age of artificial intelligence and advanced technological programming.

So, it should come as little surprise that the Bogue Chitto Attendance Center’s robotics team — the Technocats — made history at a recent tournament. They soundly broke the old Mississippi state robotics record by tallying 249 points in a single day.

“It feels really good to have broken the record, because the kids work very hard,” Robotics coach Reginald Wise said. “They’re the ones who did it.”

Ja’Undra Glover was a Technocat before graduating from Bogue Chitto in 2015, and she now serves as one of the team’s mentors. Along with Wise, she helps students prepare for future careers in mechanical engineering.

“Our job is to take the kids who don’t really do sports and teach them how to do things geared toward STEM — science, technology, engineering and mathematics,” she said. “On our team, the kids build robots and learn how to program them.”

The Technocats are one of only a few competitive robotics teams in Southwest Mississippi, but they battle alongside some of the best groups in America.

“We compete all around Mississippi,” Glover said. “We’ve already gone to two qualifiers this year, and we placed in both of them.”

“A lot of our kids are very shy and don’t talk much,” she said. “But, once they get into the program, we teach them about professionalism.”

Among other things, students learn the importance of sportsmanship, and they often lend a hand to rival teams in need.

One of the main elements of each tournament is the preliminary interview. Students must explain to a panel of judges how their robots are crafted and describe the processes through which their mechanisms are programmed.

Then, after the interview has ended, the actual competition commences.

Upwards of 30 teams can participate in a single day, and a champion is crowned after a sequence of rigorous, head-to-head contests.

“The robots are placed inside a covered square, and they create a design or pattern,” Glover said. “It’s all about the programming. Each competition tests how well the robots are engineered.”

The Technocats head to the state qualifying competition in Oxford after the first of the year, and Glover said they have a fine chance of taking home the grand prize.

“These competitions are often very surprising,” she said. “It could be the smallest team that wins.”

If the Technocats do well at the state level, they can expect to advance to the southeastern regional trials in Georgia. But, the closer they inch towards the national championship, the more expensive it becomes for them to travel.

The team hosts a series of fundraisers throughout the year to help send students to tournaments, and they rely heavily on local support.

“They work very hard,” she said. “They work every Tuesday and Thursday, even on holidays, to prepare for competitions.”

A Jackson man has been charged with murder in the grisly death of a Silver Creek caregiver. Senencia McWilliams, 1407... read more