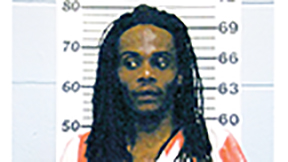 A Jackson man has been charged with murder in the grisly death of a Silver Creek caregiver.

The 34-year-old was found by sheriff’s deputies at the scene of the murder Dec. 20, he said.

Cheryl Trosclair, 54, was killed early that morning at a family home on Billy Davis Road. Butler said Trosclair took care of an elderly man at her home in the Arm community in Silver Creek.

Butler said Trosclair’s patient was present at the time of the attack, which happened some time before 5 a.m., and gave a statement to law enforcement.

“Somebody knocked on the door. He heard the scuffle up front and when he went to the room, he saw the assault,” Butler said.

The man locked himself in a room and called 911.

Investigators are trying to find a motive. They don’t think it was a robbery.

“We’re trying to figure out a connection,” Butler said.

The sheriff said McWilliams may have been under the influence of a narcotic and he is waiting on toxicology reports to be completed.

“He was so high on something, we don’t know what all he was on,” he said.

Trosclair’s patient was hospitalized for observation until the man’s niece could be contacted to get him, Butler said.

Anyone with information about the crime is asked to call the Lawrence County Sheriff’s Office Metro Crime Stoppers tip line at 601-582-7867.

When one thinks of New Year’s Eve, one likely envisions a cork flying across a crowded room. And, no doubt,... read more