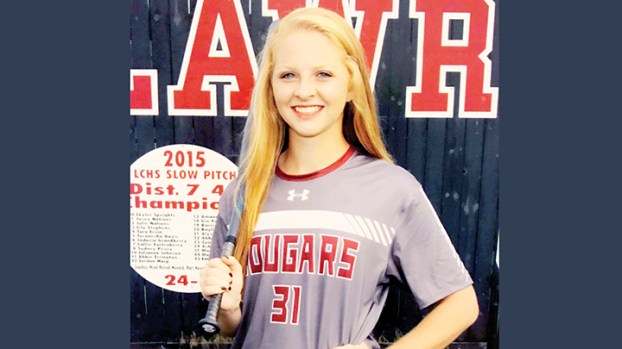 Pure meanness. She had to have it.

As a little girl, Lawrence County’s Maddux Kirkland played baseball, not softball. She was the only girl on a little league team full of boys in Monticello.

She wasn’t scared. She started at shortstop.

“I was kind of mean when I was younger,” Kirkland said. “I held my own. My daddy raised me to be pretty rough.”

After she turned 10, the league officials wouldn’t let her play baseball anymore. They made her switch to softball. It only took a week for her to get over it.

Today, Kirkland, a 17-year-old senior for the Lawrence County Cougars, is one of the region’s leading players. After a 2017 slow-pitch season in which she ran up outrageous statistics, she’s been named the Most Valuable Player on The Daily Leader’s 2017 All-Area Slow-Pitch Softball Team.

During the season, Kirkland batted .685, knocking in 65 runs and sending 20 balls over the fence. She had an on-base percentage of .710, and a deadly .974 fielding percentage from her position at left field.

Her performance helped the Cougars go 27-4 before losing in the third round of the MHSAA slow-pitch playoffs to Newton County.

Kirkland is the daughter of Wayne and Tina Kirkland. She attends Pleasant Grove United Methodist Church. She hunts deer with a .25-06.

She has already signed a softball scholarship with Louisiana State University at Eunice, where she will play catcher next year. She still has the spring fast-pitch season at Lawrence County, where she and the other Lady Cougars are looking to avenge the slow-pitch playoff loss.

Lady Cougars coach Meleah Howard said Kirkland is a key player for her team who always provides a run or hit to get the team out of tight spots. She said Kirkland is a tough player who tries to hide injuries and waves off the trainers.

Howard first joined Lawrence County when Kirkland was in seventh grade. Next year will be her first without the big hitter on the team.

“I really don’t know Lawrence County softball without her. Losing her is going to be tough,” Howard said. “But I’m really excited she’s being named The Daily Leader’s MPV. She’s definitely deserving of the honor.”

Two other Lady Cougars have been named to The Daily Leader’s slow-pitch dream team.

Sophomore Sydney Pevey batted .575 during the season, with an on-base percentage of .600. She smacked 50 RBIs and 12 homers, and recorded a .956 fielding percentage.

Senior Kaitlin Wallace batted .545 with an on-base percentage of .570. She batted in 61 runners, gave flight to 14 homeruns and recorded a .964 fielding percentage.

Three Lady Panthers from Ole Brook are on the newspaper’s team. Junior Kat Wallace batted .451 with 10 doubles and three homeruns and played her first year at shortstop after transitioning from the other side of second base.

Senior Jadeyn Fuller batted .370 and played a couple of positions in the infield, and senior Rileigh Allen batted .321 and launched two homers. She also served as Brookhaven’s slow pitcher.

The Lady Cobras did the most damage in slow-pitch during the fall, advancing to the state semi-finals before falling in a pair of high-scoring games to the same nemesis that knocked out Lawrence County — Newton County.

For their impressive playoff run, Lady Cobras coach Michelle Nunnery has been named The Daily Leader’s 2017 Slow-Pitch Coach of the Year.

“It was definitely a season we will not forget. Everything came together,” she said. “The playoffs started a whole, brand new season for us.”

Nunnery said her team is confident of more success in the upcoming fast-pitch season. She’s expecting the sophomores to show maturity and back up her upperclassmen after getting a taste of postseason play.

“I am pumped. Now that we’re a month away from practice, we’re starting to get excited,” she said. “Hopefully we’ll be ready to put forth the effort and take it one step at a time.”

Championships won, and taken away. A football team risen up from misery. A senior class captained in absentia. With the... read more