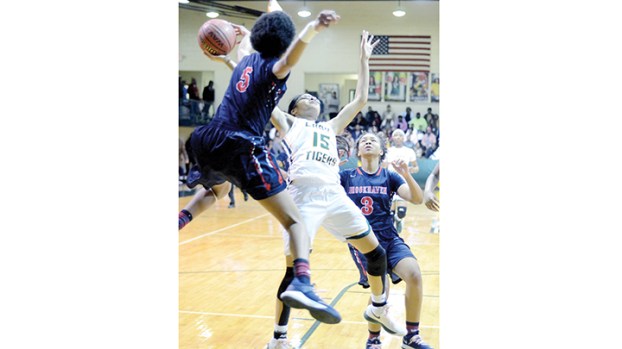 Brookhaven’s Lady Panthers stayed cool to win late in a tough battle at McComb Thursday night, taking down the Lady Tigers 45-40 to win the rivalry for the second time in two weeks.

With less than two minutes in the game, it was the Lady Panthers who remained poised to extend their fragile one-point lead on the game’s final scoring opportunities, while the Lady Tigers squandered their own last chances with a travel and a missed layup. McComb scored only one basket in the game’s last three and one-half minutes, while Brookhaven sealed up the last 1:37 with a critical and-one conversion from junior Tamia Stallings and three free throws from sophomore Silentianna Collins.

“This game, we came out with more fire than we usually do. We made smart plays to get to the goal,” Collins said.

With Brookhaven’s inside game curtailed by limited playing time for Stallings, who was battling the flu, it fell to Collins to charge inside. She accepted the challenge and still delivered on her usual shooting duties, leading the Lady Panthers in scoring with 18 points, including a trio of long three-pointers.

Senior Johnique James didn’t score any points, but she fed everyone else. She led the team in assists and steals with three each.

“We spread them out and overloaded one side to get good looks. It’s all about feeding the post,” she said.

An assist here, a rebound there, one good shot — these were the differences in a statistically even game.

Both teams hit 16 field goals and had shooting percentages hovering around 30. Both teams shot a lackluster 30 percent at the free throw line and both had more than 30 total rebounds. Both squads rotated 10 players into the game.

The only categories in which Brookhaven had a clear advantage were offensive rebounds, which they led 14-5, and fouls. The Lady Tigers out-fouled the Lady Panthers 20-8.

“All the girls stepped up to the challenge tonight and we were able to hold it close. We stayed positive,” said Ole Brook coach Preston Wilson. “Any time you beat McComb it takes a good game. They have a great program.”

“Making layups, making free throws. We just didn’t execute,” she said. “We kind of shut down in the end. We just gotta do better tomorrow.”

Lady Tigers coach Charlton Grey said his team was also battling flu and injuries and he was proud of his younger players.

“I can’t yell. They left it all on the floor for me. My young girls played hard, to the best of their abilities,” he said. “When you got 4-of-13 from the free throw line and miss five layups, that’s hard.”

Lady Tigers junior Ebony Gayden led her team in scoring with 15 and pulled down a team-high seven rebounds. Williams was next with 14 and led in assists with six.

The Lady Panthers improve to 10-5 on the season. They will host Natchez next Friday night for the first district game of the season.

The Lady Tigers remain a strong 11-3, despite the loss. They host Franklin County tonight (Saturday) and play their first district game at Raymond on Tuesday, Jan. 9.