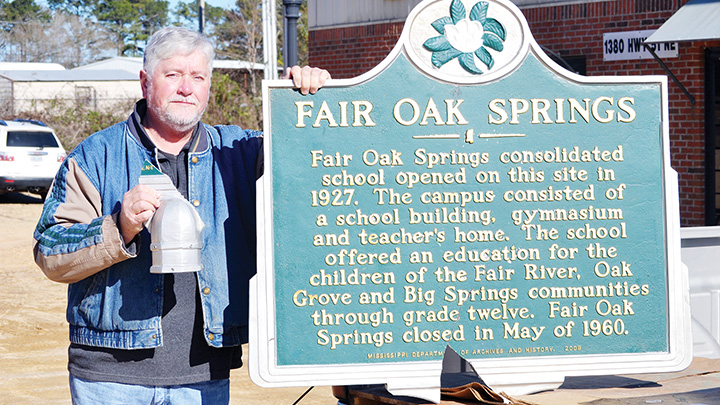 Photo by Donna Campbell/Wilson Farnham hopes to get this historical marker repaired and back in place near the site of the former Fair Oak Springs consolidated school. Donations can be made to the Lincoln County Historical and Genealogical Society.

The historical sign that marked the spot of the former Fair Oak Springs School needs a touchup.

The green marker, erected by the  MississippiDepartment of Archives and History sometime in the latter half of 2010, had been missing for a while. It was recently found by a worker for the Mississippi Department of Transportation, said Wilson Farnham.

The man contacted Farnham because he knew of his interest in the sign. Farnham had noticed the marker missing months ago. It had been sitting on a post on Hwy. 84 near Fair River Church.

“That was the original site of the school,” he said. “Looks like it received a big lick and snapped the portion it was sitting on.”

Farnham can get it repaired for a discounted price of $300 and he and the MDOT worker can install it themselves.

The history buff spoke with his friends in the Lincoln County Historical and Genealogical Society, and while they don’t have the extra funds to pay for the repairs, they will accept donations on Farnham’s behalf that will be used to repair it. Donations can be dropped off at the museum during business hours or mailed to LCHGS, P.O. Box 150, Brookhaven, MS 39602. Checks should be noted for Fair Oak Springs sign repair.

Fair Oaks Spring was a consolidated school in eastern Lincoln County that operated from 1927 to 1960. The late Larry Butler, a member of the school’s Class of 1960, spearheaded the effort to erect a marker on the spot.

The idea for the sign was brought up at a 2008 reunion, but no one took on the project. The next year, Butler said he’d be in charge of making it happen.

At the 2009 reunion, class members discussed fundraising options for purchasing the approximately $1,700 marker. Someone suggested they collect money at the reunion and by the end of the meeting had given around $1,300. Word traveled to more alumni, and by the end of the week, $1,700 had been collected.

Eighty-three years after the school first opened, Fair Oak Springs was recognized as one of Lincoln County’s historical sites.

The school opened in 1927 as a consolidation of nearby schools at Fair River, Oak Grove and Big Springs, taking on the combination of the three names. The U-shaped building consisted of eight classrooms, four on each side, with an auditorium in the middle. The elementary grades all paired up to make the four classrooms adequate, and the same teacher taught pairs of grades.

Instead of indoor restrooms, the school was equipped with a pair of outhouses. Indoor restrooms weren’t added until 1948, when they were included in the first brick gymnasium ever built in Lincoln County.

More than 500 students attended Fair Oak Springs at its peak, but by the late 1950s, the school was losing students to the Brookhaven School District. The size of the student body dwindled to around 200 before the Lincoln County Board of Supervisors voted to close the school in March 1960.

Not long after its closure, Fair Oak Springs school was torn down. As the years went on, Hwy. 84 was converted into a four-lane, and it passed right over the site of the school, near the intersection of the highway and Harmony Drive.