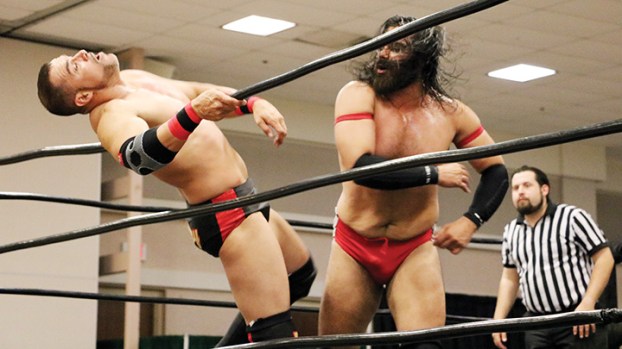 Photo submitted/Professional wrestler Steve Anthony (left) takes a shot from Danny “Cherry” Ramons during an October Bayou Independent Wrestling match in Monroe, Louisiana. The league will be back in Brookhaven on Saturday, Feb. 3.

Wrastlin’ is coming back to Brookhaven.

After a few years’ hiatus, Bayou Independent Wrestling is back on tour and coming to the Lincoln Civic Center on Saturday, Feb. 3. Doors will open at 7 p.m. and the fights start at 7:30 p.m. Tickets are $10 in advance or $15 at the door, and can be purchased at Brookhaven Broadcasting.

The Brookhaven event will feature a rematch in the Southern Title Match between current champion Vordell Walker and challenger Steven Anthony. Walker is a former TNA wrestler, and Anthony is a former National Wrestling Alliance champion and trainer.

Former TNA three-time tag team champion Chase Stevens will also be on-hand to face Terrale Tempo. In all, a dozen wrestlers will beat each other senseless as safely as possible.

“Wrestling is one of those things where it’s scripted, but it’s not fake,” Newell said. “The guys get hurt at every single match. There’s no ketchup packets — that’s a myth. These guys train for wrestling, for how to be safe but also realistic.”

Newell said the February match would be full of hard-hitting action.

“We try to keep it different from WWE. We talk a little less and wrestle a lot more,” he said. “We don’t have the money for fireworks and stuff, so we do some smash-mouth wrestling.”

Despite the action and the potential for blood, Newell said his shows are family friendly. Bayou performs at churches, festivals and other family events, and although bodies occasionally fly out of the ring, F-bombs do not.

“We try to keep it clean and family-friendly,” he said. “We want everybody to feel comfortable. We don’t want a lot of stupidity. We just want everyone to see some athletes and some entertainment.”

Newell said he’s expecting a crowd around the 400 mark. Bayou has already scheduled a springtime bout in Brookhaven for May 19, and if the first two shows are well attended there could be more in 2018.

“If all goes well we will try to do two more before the year is over,” he said. “If people come out and support the show, it can come again and it can come often. Bring the whole family for $40 and see a show right here at home.” 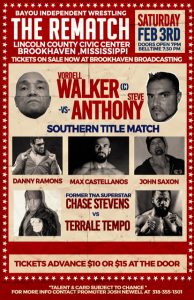