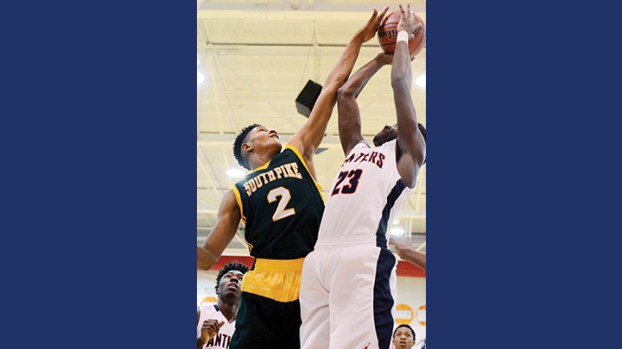 A late Brookhaven rally wasn’t enough to close the gap left by a bad night shooting against South Pike Tuesday and the Panthers paid the price, falling to the Eagles 55-45.

An energized crowd and a big three-point shot from Ole Brook senior Richard Marshall brought the Panthers to within eight points of the Eagles with less than three minutes to go, but the excitement died fast as South Pike kept on scoring. The Eagles created and maintained a roughly 10-point lead throughout the second half and Brookhaven was never able to find a way to punch through it.

“We weren’t running our offense all the way through. We were just taking too many long shots instead of getting inside for the easy shots,” said Ole Brook junior guard Axavian Jones. “We gotta get in the gaps and get the easy shots.”

Shooting statistics back up Jones’ story.

The Panthers were way off against South Pike, hitting only 18-of-60 field goal attempts for 30 percent. Brookhaven’s shooters got desperate against the Eagles’ tight interior defense and put up a bunch of lame ducks from three-point range, firing off 22 shots from outside the city limits and hitting only four for 18 percent.

Ole Brook’s tendency to try and shoot their way out of a jam is something that has to be corrected, said coach Marcus Flippin.

Flippin said he was considering outlawing the three-point shot — he was joking, of course, but he does have a clear idea of what’s going to happen in practice before Region 6-5A play begins with a visit from Natchez Friday night.

“We’re going to do a lot of individual work this week. We still have some guys who don’t understand what we’re trying to do,” he said.

The non-scoring stats for Brookhaven were fine. The Panthers didn’t get many steals, but they also protected the ball well with only nine turnovers and hit the boards 34 times.

But South Pike’s size seemed to throw Brookhaven a little off its game. The Panthers had a hard time climbing over the Eagles’ big men for clean shots inside — which led to the rainstorm of three-pointers — and those same big men were able to get in too close to Brookhaven’s basket.

“We went with a big lineup tonight and pounded the ball inside,” said South Pike coach Hilton Harrell. “The first time we played Brookhaven we didn’t know the shooters. This time we identified their shooters and limited them to one shot.”

The main South Pike pounder was senior Jalon Andrew, who towered over everyone on the court.

“The advantage we had was being able to get to the glass, even when they put two guys on us,” he said. “We just hustled and played defense like our coach told us to. We closed them out real good.”

Eleven of the 16 Panthers on the roster got playing time against South Pike, but only five found the basket.

Marshall said Brookhaven needs more aggression in the game’s early stages. Brookhaven hung within a point of South Pike in the third and fourth quarters, but lost the game in the first half by scoring only seven in the opening period and 10 in the second.

“Most of the games we lose, we start too slow. Way too slow,” he said. “We are gonna have to practice it out.”

The Panthers fall to 9-8 with the loss. They host Natchez Friday evening immediately following the girls’ game, which starts at 6 p.m.

South Pike is on a roll this season, and the win improves them to 11-3. The Eagles have a few days’ rest until they begin Region 6-4A play against Richland at home Tuesday.

Karly Leake, a 16-year-old student at Bogue Chitto, did a little Christmas break hunting on Dec. 21 when she saw... read more